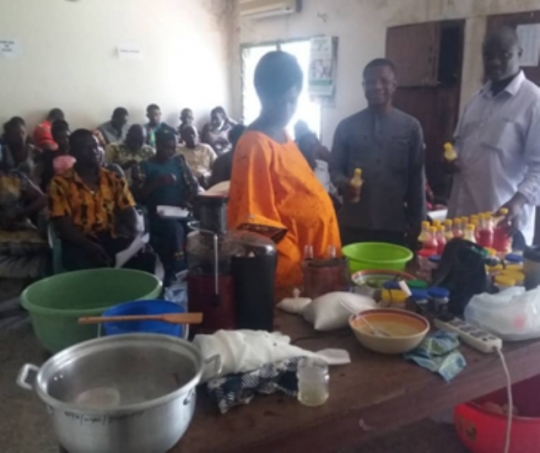 Thirty-two fruit farmers in the Asante-Akim South Municipality, have benefitted from a training programme to extract natural fruit juices, as part of efforts to address post-harvest losses in the Municipality.

The training, organised by the Women in Agricultural Development (WIAD), a section of the Municipal Directorate of the Department of Agriculture, was to build the capacities of the farmers in food processing, to add value to their produce and avoid massive waste in the event of a glut.

Most farmers in the Municipality who cultivate fruits such as oranges, pineapple and water melon on a large scale, are said to be losing their investments when the produce are harvested in abundance, due to their short lifespan.

They are often left with no choice but to sell these perishable food crops at ridiculous low prices without even recovering their investments, much less their profits.

It is for this reason that the Department of Agriculture, is taking steps to train the farmers in value addition under the Modernizing Agriculture in Ghana (MAG) programme, receiving funding from the Canadian Government.

Participants made up of 17 females and 15 males, were taught how to produce fruit juice, marmalade and jam with pineapple, watermelon and oranges.

They were also trained on good branding – how to package and label their products to make them attractive and marketable.

Mrs. Angelina Komesuo, the WIAD Officer who led the training, said the focus was mainly to help orange farmers cut down their losses as most of them were quitting the business for other ventures.

She said some orange farmers out of frustration had resorted to cutting their orange trees to pave way for the cultivation of other crops due to lack of market and low prices.

These, she said, were feedback the Department picked from the farmers during their numerous engagements, which informed the decision to train them to reduce post-harvest losses.

Mr. Mohammed Abass, the Municipal Director of the Department of Agriculture, said the training apart from empowering farmers to preserve their produce, would also provide alternative livelihood for beneficiaries.

He said his outfit would continue to explore innovative ways to make activities of farmers economically viable and urged farmers in the Municipality to work with the department to improve on their income.

He counseled beneficiaries to put the training into fruitful practice to increase their incomes, saying that, farming was a profitable venture worth their investments.

Garden set up for Basic Schools in Akatsi South