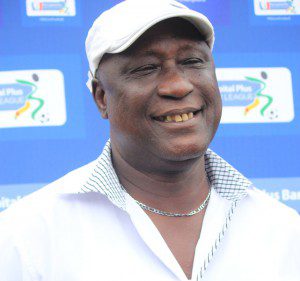 Life Patron and owner of Kumasi Asante Kotoko Otumfuo Osei Tutu has revealed that the club will be going back for outcast coach Bashiru Hayford after he won the 2014/15 Premier League.

Hayford a former Kotoko coach was named the coach of the season by the Premier League Board and the Asantehene has hinted that he will bring him back to the Red family.

Otumfuo Osei Tutu II made the pronouncement when the management, technical team and playing body of the Ghana league champions paid a courtesy call on him to announce their championship winning feet.

In addressing the AshantiGold entourage, Otumfuo opined that Coach Bashiru Hayford is a Kotoko coach and they [Kotoko] will definitely come back for him.

“Bashiru Hayford is a Kotoko coach. He is my coach. So let him know that at the appropriate time I will come back for him,” he said.

At a time that the fans think David Duncan is building a winsome side, the Life Patron of the club has sent signals to the technical team that they are not safe.

Bashiru Hayford was sacked as the head coach of Kumasi Asante Kotoko in 2008.