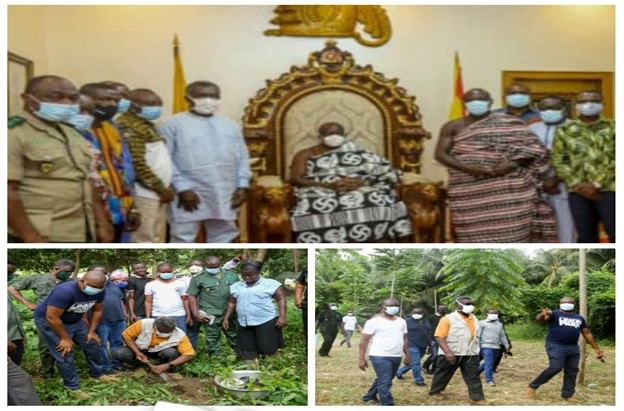 Otumfuo Osei Tutu II, King of the Asante Kingdom, has reaffirmed his commitment to promote responsible environmental practices to restore water bodies in the Kingdom to their natural state.

The Asantehene who was speaking during a courtesy call on him by the Minister for Environment, Science, Technology, and Innovation, Prof. Kwabena Frimpong Boateng, said forestry and agriculture accounted for 53 per cent of land use and employed about 60 per cent of the population in the Kingdom.

Prof. Frimpong-Boateng was accompanied by technical heads from agencies such as the Environmental Protection Agency (EPA), COCOBOD, Forestry Commission (FC), and its various divisions.

The team was at the Manhyia Palace to explore a possible collaboration with the Asantehene in the implementation of the Asante Kingdom Land Restoration Programme.

It is also promoting the use of climate-smart agriculture technologies to build the resilience of smallholder farmers within the cash and food crops landscapes targeted under the project.

The programme, which began in 2019 with the target of planting three million trees on 4,000 hectares of land around Lake Bosomtwe over five years is a collaboration between the Manhyia Palace and Oheneba Poku Foundation.

Lake Bosomtwe has since 2016 been designated a Biosphere Reserve Site by the United Nations, Education, Scientific and Cultural Organisation (UNESCO) to promote a healthy balance between biodiversity conservation and its sustainable use, following an appeal by the Asantehene for the protection of the lake.

Otumfuo was hopeful that the project would contribute to improved ecosystem service provision, climate change mitigation, and improved environmental consciousness among inhabitants of fringe communities around the lake.

He entreated the Minister and other relevant stakeholders to join Asanteman not only to protect Ghana’s only natural lake but other water bodies to preserve the environment for posterity.

The Minister who also visited the Lake to inspect the progress of work commended Otumfuo for the bold initiative to protect the lake and restore its glorious past.

He said the volume of water in the lake had receded over the years due to human activities and applauded Otumfuo for the timely intervention to save the lake from further destruction.

He said his Ministry would team up with Otumfuo to preserve the lake and leverage the success of the project to replicate it in other parts of the country for sustainable protection of the environment across the country.

Mr. Fred Kyei Sapong, Coordinator of the Project, said it was in line with several global and national policies, plans, and strategies that focused on water bodies and halting deforestation caused by human activities.

He said the visit by the Minister confirmed the modest gains made by the project and the need for more work to be done to reverse the wanton land degradation to unlock the development potential of the project areas.