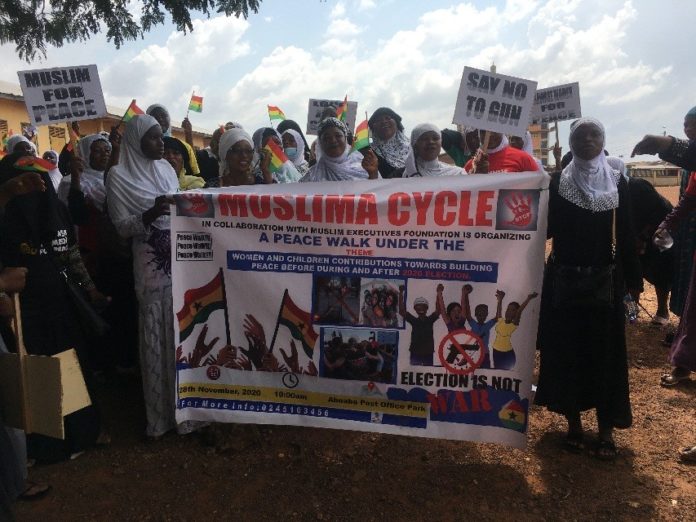 Fauzia Adams, the Women’s Coordinator of the Muslima Cycle at Asawase constituency, has called on people in the constituency to help maintain peace ahead of the December 7 general elections.

She said, “Elections is all about competition of ideas, so our political leaders should ensure that the people of Ghana continue to enjoy the peace.”

Madam Adams made the call when she addressed the media after a peace walk organized by the Muslima Cycle, in collaboration with the Muslim Executive Foundation.

It was under the theme: “Women and Children contributions towards building peace before, during and after 2020 elections.”

Madam Adams said women, children and the disabled were the people most affected when there was a conflict in any country.

She appealed to Imams, Mallams, Chiefs, political leaders and men, to come together and promote peace in Ghana before, during and after the December elections.

Madam Adams said Ghanaians must bear in mind that, Allah had already elected the President of Ghana.

“Allah has already elected the President, we are just going to vote,” she stated.

She also appealed to the youth in Asawase, especially the young men, to desist from political violence, and also not to allow themselves to be deceived by the political leaders.

Malama Bushira Iddis, one of the Zongo teacher’s in Asawase, said Ghana needed nothing but peace in the upcoming elections.

She said the need for the youth at Asawase was to remove the violence tag that had been associated with them during elections and changed their attitude towards ensuring peace on election’s day.