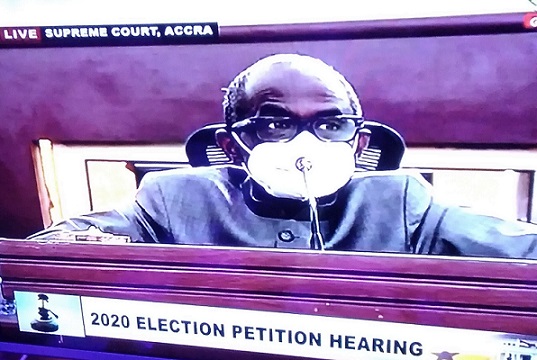 Mr Asiedu Nketiah, who is one of the Petitioner’s witnesses, after identifying his witness statement in court, had his evidence halted as a result of an objection raised.

Mr Akoto Ampaw, lead counsel for the second respondent (Nana Addo Dankwa Akuffo Addo), objected to the admissibility of 10 out of the 39 paragraphs of the Asiedu Nketiah’s witness statement.

Mr Akoto Ampaw contended that the allegations raised in those 10 paragraphs were highly scandalous, prejudicial and same were not part of his pleadings before the Court.

Mr Apaw therefore prayed the seven member panel to struck out those 10 paragraphs.

Mr Tsatsu Tsikata, Counsel for petitioner, in response, held that the 10 paragraphs were issues of facts and the first respondent admitted that there were errors in the number of total valid votes cast declared.

According to him, the 10 paragraphs were clearly pieces of material evidence relating to the facts of the case.

The court has retired to Chambers to deliver its ruling.