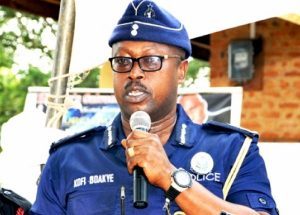 This followed the recent reshuffle in the police administration.

COP Boakye, is now the Head of Research and Planning Unit of the Police Administration as Deputy Commissioner of Police (DCOP) Ken Yeboah takes over from him.

COP Boakye thanked the Otumfuo Osei Tutu II, the Ashantehene, other traditional authorities, officers and men of the Service, among others for making his tenure a success.

He explained that the unique success chalked out by his administration should be attributed to the hardwork of the rank and file of the personnel in the region.

He praised the media for the unflinching and objective support for the Command.

DCOP Yeboah hailed the outgoing Commander for his unique development in the Region.

He called for support to enable him continue with the good work done.

The gathering was treated with good music by the police band, Maestro gospel musician Diana Asamoah, highlife music from “Agya koo” and “Ajorso”.