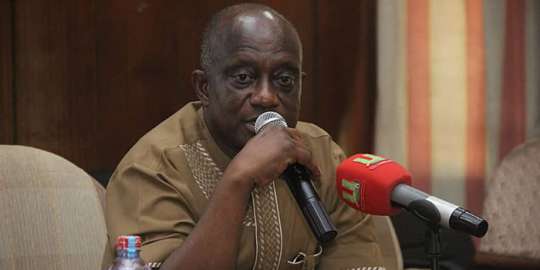 The Ashanti Region has received its fair share of the national cake in terms of infrastructural projects and will show appreciation to President Akufo-Addo on December 7 elections, Mr Simon Osei-Mensah, the Regional Minister, has said.

He mentioned some of the development projects as roads, sanitation facilities, classroom blocks, water systems, and electrification projects.

On social interventions, he said, farmers in the Region received improved seedlings for cultivation under the Planting for Food and Jobs and Planting for Export and Rural Development, thousands of students benefitted from the government’s Free Senior High School policy, while residents enjoyed free water supply and electricity.

“We’re grateful to President Akufo-Addo for giving us our fair share of the national cake because in the education sector alone, we have 702 projects, with 424 at the basic level and 278 in the secondary school level,” he added.

The Minister expressed the appreciation at the Ninth Edition of the Nation Building Updates in Accra on the theme: “Rebuilding the Ghanaian Economy”.

The Minister gave the assurance that, the Regional Coordinating Council would ensure free and fair elections in the Region despite the Region being the ” stronghold” of the ruling NPP government.

He said election was a contest of ideas and not insults and violence and thus, warned that anyone that would engage in unlawful practices would be dealt with by the security agencies.

The Minister said the NPP would work extra hard to increase its vote margin by 1.5 million difference against the opposition NDC in the presidential race.

The Nation Building Updates is a platform for Government Ministries, Departments, and Agencies (MDAs) to render accounts of their stewardship to the public, as part of the government’s accountability efforts.