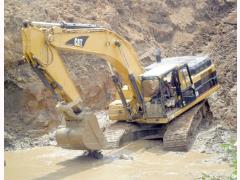 According to him, during the tension between AngloGold Ashanti, Obuasi mine and the Small Scale miners earlier this year, some residents of Obuasi pointed accusing fingers on him for owning several galamsey pits, the reason for his delay in calming situations

“Earlier this year, people went behind the Obuasi Must Not Die campaign on radio and other means and attacked my personality and that of the Municipal Chief Executive and even went to the extent of accusing me of owning galamsey pits;

Kwabena, those who really know me will attest to that fact that, I have never and will never meddle in such things”, he stressed.

The Honourable Ashanti Regional Minister made these clarification when he was hosted by Nana Kwabena Yeboah on Time FM, an Obuasi based radio station, Tuesday Morning.
Redundancy collapsed Obuasi Economy.

“Kwabena, after AGA laid off over 4,500 workers and paid them off with huge sums of money, most of them left town, others too are still in town leaving their whole life on the money hat were given them without making any proper investments that would’ve had positive impact on the economy”, he stated.

According to him, residents should continue to pray for the revival of the Obuasi mine and also assured listeners of the interventions ongoing to bring permanent solutions to please all factions.

“The Minerals Commission’s Movement Committee is working on the 60% concession of the AGA given out to Government to be demarcated between small scale miners in Adumanu; it is not too late, things will get better soon”, he explained.