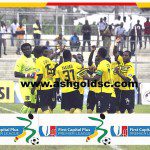 Ashantigold goalkeeper Fatau Dauda believes his side is on course to win their first Premier League title in 20-years.

The miners fought from behind to beat Medeama 2-1 in Obuasi on Sunday to open a three-point lead at the summit of the table with three games to end the season.

Coach Bashir Hayford?s men have it all to do with three crucial games expected to determine their title credentials this term.

They travel to the dreaded Golden City Park as guest of Chelsea and goalkeeper Fatau Dauda is convinced they are well on course to.

?Gradually we getting there, Ashgold s/c wining de title on our mind, we believe over hope.? he tweeted.