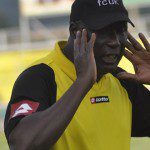 Ashantigold coach Bashir Hayford says he remains optimistic about his team?s chances of winning their first Premier League title in 20-years despite seeing their lead cut to only four.

The miners lost 2-1 at struggling Heart of Lions on Sunday to leave them just four points above Berekum Chelsea, who recorded an emphatic and historic 3-0 win at champions Kotoko.

With relatively easy ties for Chelsea in the title race, the miners? trainer is refusing to press the panic button, insisting his side will clinch the title.

?I will say we have one hand on the trophy. Ever since we begun the League we have been impressive and everyone tipped us to win the League,? he told Accra-based Adom FM.

?Management has been supportive throughout the season. The playing body has given their best and I am very sure we will lift the trophy at the end of the season.?

Ashantigold clash with New Edubiase in a crucial local derby at the Len Clay stadium on Wednesday.