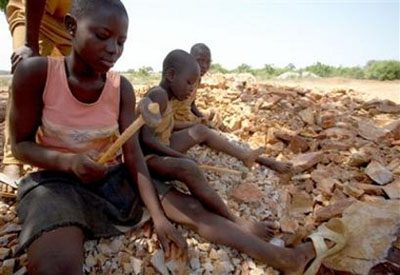 The Ashaiman Municipal Assembly (ASHMA), in collaboration with the famed Abibigroma drama group, have marked World Child Labour Day at a special ceremony at Ashaiman.

Abibigroma enthralled the gathering with a thought provoking drama on child labour and its repercussions on victims.

Speaking at the function at the Ashaiman main market, an Assistant Director at ASHMA, Mrs. Naa Boeki Sodpaah, said June 12 of every year is set aside to sensitize the public about child labour.

She said children under the age of 18 years go through lots of torture, like street hawking among others, hence sacrificing school and their future.

Mrs. Sodpaah said in order to reduce child labour in Ashaiman, the Assembly is liaising with the

Social Welfare Department, to educate the public about the dangers inherent in child labour.

She called on all residents of Ashiaman and Ghanaians in general, to join hands to put a stop to child labour.

Madam Akosua Abdallah, Director of Drama at the National Theatre, said the essence of the theatre is to educate people.

She said the drama display was to create an impact and to leave a compelling imagery on the minds of residents in Ashaiman to help eradicate child labour.

She said parents should protect their children from the brutalities of life, so that they do not grow up to see the negatives in life which usually result in armed robbery, prostitution and other vices,

She asked adults to give birth to the number of children they can take care of, so that the children do not grow trapped in the poverty cycle. GNA