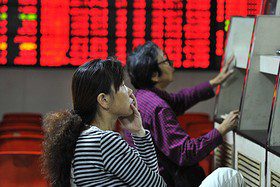 Crude?oil prices fell?as much as 5% overnight on weak US demand and Saudi Arabia reaffirming that it has no plans to curb output.

Added to that, a key gauge of Japan’s capital spending fell for the first time in five months in October.

Core machinery orders fell 6.4% month on month, well below forecasts of a 2.4% decline.

That led the benchmark?Nikkei 225?to end down 0.9% to 17,257.40, pulling the index further away from the seven-and-a-half year highs hit at the beginning of this week.

Australian shares were lower on a mixed jobs report after data showed that the economy added more jobs than expected.

In South Korea, shares were down after the country’s central bank kept interest rates unchanged for a second consecutive month, in line with expectations.