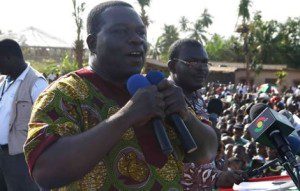 The US$3-k bribe allegedly taken by Dr Josiah Aryeh from the governing NPP, weeks ahead of the 2004 general elections, cost the National Democratic Congress victory in that contest, the party?s General Secretary Johnson Asiedu Nketia has said.

In his estimation, the NDC ? in opposition at the time ? would have won the contest but for his predecessor?s corrupt attitude.

?In 2004 when we had only two weeks into an election everybody knew that the NDC was heading towards victory then we heard the news that the General Secretary at that time had gone to NPP to take a bribe of 3,000 and that led us into opposition,? the former Legislator insisted in the Upper West Regional capital Wa where the NDC party has been holding its elections for a National Women?s Organiser.

General Mosquito, as Asiedu Nketia is popularly known, used the anecdote to caution party delegates against taking bribes or allowing their votes to be bought in the elections.

?If we elect leaders on the basis of how much they can pay, when they become leaders,? they are prone to corruption, he warned.

?Because each branch organiser wants to take money from constituency organiser before they vote with the claim that they will use the money to pay their campaign expenses.

He said: ??The worst thing that can happen is to have within the national executive committee, members who have compromised themselves with the opposition.?

Dr Aryeh has always insisted he took no bribe from the NPP as was alleged at the time.

Meanwhile Joyce Mahama Zainab has been elected as the new National Women?s Organiser of the NDC.