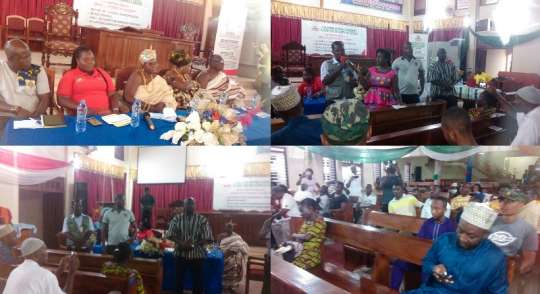 The event, brought out Assembly Aspirants of the Nmenmeete Electoral Area to debate among themselves and discuss their policies and programmes for the area.

The event will be extended to the other six electoral areas of the Assembly.
At the event, the three aspiring Assembly members of the electoral area, took turns to outline their policies and programmes in areas of roads, education, sanitation and security.

The aspirants were; Yakubu Abane Asoke, the incumbent, Iddris Aminu and Mustapha Dawuda.

He said he was always available whenever they called on him, and would continue to serve their interests.

Mr Asoke, who was an Assembly Member for the past eight years, said he distilted most choked gutters in the area, provided street lights in the community, and was lobbying for a six-unit classroom block to be built for the Rev. Max Dodu Presbyterian Basic School in the community.

Mr Dauda, however, bemoaned the achievements of the incumbent, saying, his efforts was woefully inadequate.
He promised to do better to improve sanitation by frequently organising clean-up exercises, providing a more vigilant community security special force to deal with the alarming crime rates in the area and provide adequate community street lights.

He said he would also provide a good sanitation plan to tackle sanitation in the community, and create a community security task force to tackle vices.

The event was chaired by Naa Adorley Ablade I, the Chairperson of the Greater Accra Queenmothers’ Association and Queenmother of the Sempe Newton.

She advised the public to vote for competent persons at the local level to ensure development and peace.

She commended the organisers of the event, which she said would deepen the knowledge of the public on the decentralisation process and called on all stakeholders in the community to support the good platform the event created for the development and growth of the community.

Mr Ebenezer Annan, President of ACCAD, said their objective was to empower the people of Ablekuma Central Municipal Assembly to see the need to participate in the governance process and to hold authority bearers accountable for their community.

“ACCAD believes that development will only take place in our communities if we, the members of the community, get involved in the local government process and asking what is in it for the community,” he said.

The event was graced by Naa Adorley Ablade I and her entourage, Ms Comfort Azalletey, the Municipal Director of the National Commission for Civic Education, a 15-member aspiring Unit Committee Chairpersons and some section of the public of the electoral area.

LGBTQI+ debate is a waste of time-Kpone Mantse

LGBTQI+ debate can encourage or discourage the practice – Psychologist