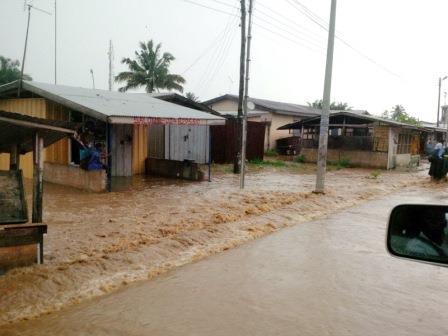 Assembly Member for Tettegu Electoral Area in the Weija-Gbawe municipality of the Greater Accra Region, Mr Bright Kwame Adabra has made a passionate appeal to the Weija-Gbawe Municipal Chief (MCE), Mr Patrick Kwasi Brako Kumor and Member of Parliament (MP) for the area, Mrs Tina Gifty Naa Ayeley Mensah to construct the drains to ease flooding situations in the area.

“We the residents of over five thousand (5000) population in Tetegu are appealing to authorities through Assembly Member Hon Bright Kwame Adabra, for the construction of drains,” they stressed.

According to them, any time there are heavy downpours, many parts of the Tettegu floods resulting to the loss of properties running to millions of Ghana cedis.

They sent a save of soul messages to state authorities to put up measures to fix flood-prone-Tettegu areas because the situation caused by the flooding waters is gradually escalating.

However, the government has ongoing projects such as construction of a new clinic, sanitation facility and a school has come to halt due to unmotorable road access and unavailable drains.

He lamented that sometimes the flooding situation is serious to the extent that property owners with cars cannot access their home to safely park their cars which has resulted in over 15 cars broken into and parts stolen due to them parking at the roadside.

Sampson Panpanso No.2 community appeals to IGP for Police protection

Zanlerigu community appeals for the renovation of Health Centre