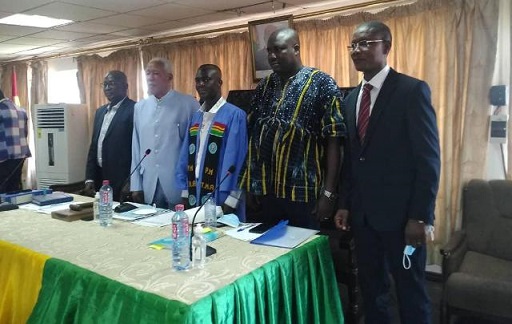 Mr Isaac Ashai Odamtten, Member of Parliament for Tema East, has appealed to the Tema Metropolitan Assembly (TMA) to provide communities in the Metropolis with large water tanks to mitigate the shortage of portable water in some communities.

Mr Odamtten who was responding to complaints from some assembly members from Tema Newtown on the unavailability of treated water in their areas for the past six to nine months, appealed to TMA to put in contingency measures to mitigate the problem.

Some Assembly Members in Tema Newtown during the First Ordinary Meeting of the First Session of the Eighth Assembly of TMA at Tema has complained to the Ghana Water Company Limited (GWCL) about irregular water supply to their communities.

The Assembly Members who got the opportunity to question GWCL on the issue, said the last time the Company served them water was between six to eight months.

Based on the issues raised, the MP suggested that, “the Assembly should consider the installation of big water reservoirs in communities to help those in low lying areas that are not receiving water”.

He noted that not every resident especially those in slums and densely populated areas could afford the services of private water tankers to meet their needs, therefore the Assembly together with stakeholders must provide them with community tankers.

Mr Odamtten who is an MP with the opposition National Democratic Congress, said the whole Greater Tema Area was facing water scarcity as development in these areas had outgrown water supply, so measures must be put in place for water sustainability.

Mr Felix Mensah Nii Anang-La, Tema Metropolitan Chief Executive, said the Assembly had received complaints from the traditional leaders, which had subsequently been channelled to the GWCL to no avail, indicating that residents relied on tankers for water supply.

He said the pipe lines laid in the 1950s was currently insufficient for the increasing population and industries.

Alhaji Baba further noted that the three tanks at the Tema Booster Station provides water for a large area including Tema, Kpone, Ningo-Prampram, Ashaiman, through to 37 Military Hospital and parts of the Eastern Region.

The ordinary session was attended by Assembly members as well as Heads of Departments; Mr Enoch Teye Mensah, Greater Accra Representative at the Council of States; Mr Yves Nii Noye Hansen, Member of Parliament for Tema Central, among others who deliberated on the recommendations in the Authority’s report.

The Authority’s Report is generated from the various working sub-committees, when the recommendations are ratified by the House, which is the highest decision making body of the Assembly, staff then see to its implementations.

There were other recommendations covering justice and security, environmental health, social development services, ports and harbours development, finance and administration, revenue mobilization and agriculture among others.