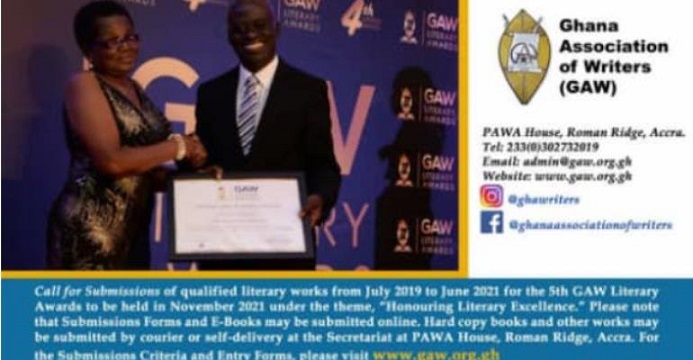 The Ghana Association of Writers (GAW) on Sunday called for submission of qualified literary works from July 2019 to June 2021, for the Fifth Literary Awards slated for November.

The event will be held on the theme: “Honouring Literary Excellence.”

A statement signed and issued by Ms Christina Dompreh, the Administrative Manager of GAW, in Accra, and copied to the Ghana News Agency, said the prestigious awards were first held in August, 1987, 30 years after the founding of the Association, under the leadership of Professor Atukwei Okai.

It said it was created to celebrate, inspire and promote Ghanaian literary talent, as GAW believed that literature played a critical role in the development of a nation.

The statement said since its establishment in 1987, the GAW Literary Awards had grown to become the largest literary awards in the country.

This year it will recognise writers in 12 categories:

The statement said for the Submissions Criteria and Entry Forms, the public should visit www.gaw.org.gh.

It said the works must demonstrate good linguistic presentation, societal values, universal truths, the nation’s identity and cultural aesthetics. It must also contribute to social cohesion and nation building.

The occasion would also see the conferment of a number of Achievement and Distinguished Service Awards on notable literary personalities who have contributed to the development of literature and the arts in Ghana.

The statement said submissions Forms and E-Books may be submitted online.

Hard copy books and other works may be submitted via courier or self-delivery at the Secretariat at PAWA House, Roman Ridge, Accra.