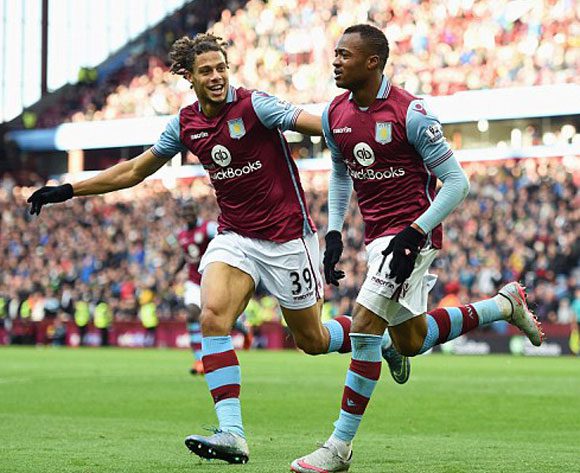 Ghana striker Jordan Ayew was rated Aston Villa’s best player in their 2-1 defeat at Tottenham on Monday night despite being a substitute.

The 23-year-old came off the bench to score the consolation goal.

Newly-appointed manager Remi Garde, who was in the stands, will be happy with Ayew’s performance.

Here is how Aston Villa players rated in their Premier League match against Tottenham:

Brad Guzan 6/10 – Has taken a fair amount of flak in recent weeks but can’t be blamed for the three he let in on this occasion.

Alan Hutton 6/10 – Was constantly bombing down the flank but his wayward crossing let him down once again.

Ciaran Clark 4.5/10 – Outmuscled by Moussa Dembele for the opener and looked very shaky for the rest of the game. Using him as a right-sided centre-back seems to be a recipe for disaster.

Joleon Lescott 6/10 – Arguably his best game in a Villa shirt but that’s not really saying much. A soft headed clearance led to Delle Alli doubling the home side’s lead just before the break.

Kieran Richardson 5/10 – Offered nothing going forward and was no better at the back than the benched Amavi. Likely won’t be starting over the Frenchman for much longer if Remi Garde has any sense.

Carlos Sanchez 6/10 – Defensively solid but gave away possession far too frequently for someone in his position.

Ashley Westwood 6/10 – Had completed 100 per cent of his passes before being forced off in the 38th-minute after taking a blow to the face during a tussle with Dembele.

Leandro Bacuna 5.5/10 – Moved into a central role after Westwood went off, but aside from hitting the post with a thumping shot, the versatile Dutchman made little impact in his makeshift position.

Jack Grealish 5/10 – Replaced by Gil in the 65th-minute after falling to offer any kind of attacking threat. No chance of an England call-up coming in the near future based on his current form.

Scott Sinclair 6/10 – Showed a few flashes on the left but the end product just wasn’t quite there.

Gabby Agbonlahor 4/10 – Replaced at the break after managing just eight touches during the opening 45 minutes. A calf injury was supposedly the reason for his withdrawal, but everyone’s patience is wearing thin at this stage.

Jordan Ayew (Westwood 38) 7/10 – Bizarrely benched after scoring against Swansea City, the first-half substitute pulled a goal back in the 80th-minute with a deflected shot and almost equalised five minutes later with another long-range effort.

Rudy Gestede (Agbonlahor 46) 6/10 – Spurned two golden chances to score but his towering presence up top did at least give the visitors an attacking focal point.

Carles Gil (Grealish 65) 6.5/10 – No surprise how much better Villa looked once he came off the bench. The incoming Garde has to start him week in, week out going forward.