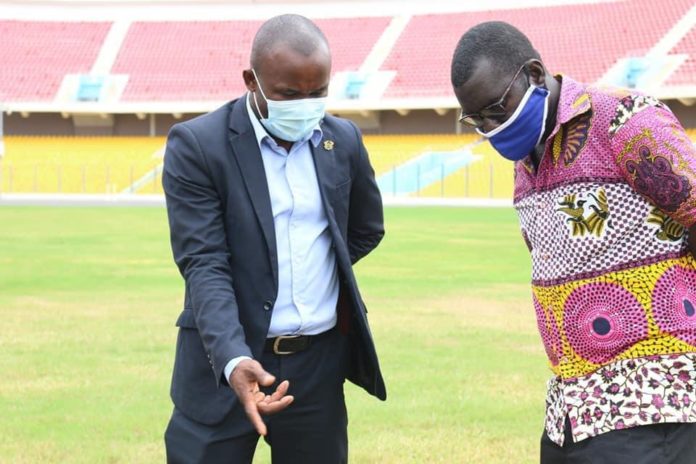 Tongraan Naab Kugbilson Nalebegtang the Overlord of Talensi Traditional area, in the Upper East Region, has said the construction of an AstroTurf at Wintogo-Bolgatanga will solve a huge infrastructure deficit in the region.

The Overlord said this when Executives of the Ghana Football Association (GFA), led by President Kurt E.S Okraku called on him at the Tongaraan Palace at Tongo near Bolgatanga in the Upper East Region.

“When the information got to me that you were looking for a place to build an AstroTurf for this region, I was so elated that I didn’t want to listen to any complaint from others,” Tongraan Naab Kugbilson Nalebegtang told the gathering.

“The Chief of Winkogo told me that he was encountering some difficulties so I called him and his people to come here. Luckily, I spoke to all the parties and they all understood that this was a venture that we should not miss.

“So gladly, they all agreed that the project must come on. I am pleased to have you come here, especially you the President. Because it indicates to me that you mean business.

“The fact that you have travelled all the way from Accra to this region to see to it that the plot of land that we have given to you is used for the purpose for which you have taken it, I want to say that I thank you very much for this park.

“This region, most of the time, is deprived of so many things and I will not mince words here and say that this is something that is going to project the Ghana Football Association in your era, having solved the infrastructure deficit in the Upper East.

“We have quite a number of talents in all spheres of sports and I am sure that the land that has been given to you will soon produce results. In no time, you are going to have talents in your Black Stars, Black Meteors, the Queens and all the other national teams.

“We are ready to support you. All you have to do is to let us know your problem and we shall be there to support you,” Tongraan Naab Kugbilson Nalebegtang added.

President Kurt E.S Okraku, on behalf of the GFA, thanked the chiefs and elders of the community and authorities of the Bolgatanga Senior High School for the land and promised that work will commence soon.

“I am particularly happy that this construction will go a long way to help the growth of football in the region,” Mr. Okraku stated.

The facility, when completed, will serve the people of Bolgatanga and its environs and will help solve the huge sports infrastructure deficit the region has been facing over the years.

Other projects earmarked under FIFA Forward 1.0 will be announced in due course.

FIFA to announce dates for playoffs next week

CAF WCL: “Go for gold, we are behind you”- GFA General Secretary urges Hasaacas ladies

“I will deal with you all”- Kurt warns match-fixers