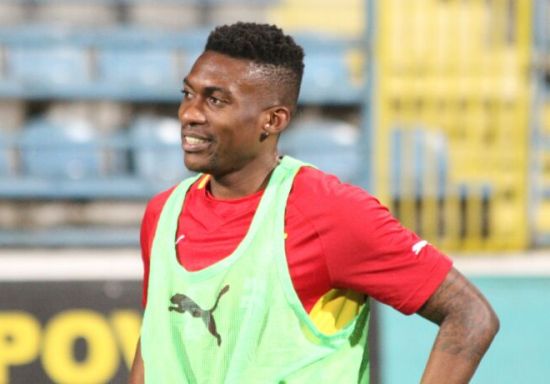 1′ Defender David Addy fouled his opponent to give away a penalty kick just after kickoff.

Striker Dejan?Damjanovic?stepped up to slot home the opener ? much to the delight of the home fans.

Addy got booked for that challenge that gave away the penalty kick.

5′ Ghana midfielder?Michael Essien fires a shot from deep but it goes wide. The Black Stars controlling the game at this point.

8′ Essien?again with a shot from the edge of the box but Montenegro goalkeeper Mladen?Bozovic?charges the shot down and subsequently cleared by Marko Basa.

10′ Ghana in full control of the game as David Addy?lays off a pass to captain of the day Michael Essien.

15′ David Addy winsa throw off his marker. the Black Stars keeping possession well but not hurting the opposition enough.

17′ Chritian Atsu charges into the Montenegro box but his final shot under a challenge was feeble. Claiming a penalty kick but referee turns down his plea.

18′ Atsu trying to beat his marker with a bout of step overs he is however forced back to Daniel Opare.

19′ Ghana begining to give the ball away cheaply. But Essien wins it back for the Black Stars.

20′ Essien tries to pick a pass with the outside of his boot but it goes straight to an opponent.

23′ Another appeal for a penalty appeal against Ghana as ball appears to have hit the hand of Christian Atsu in the box. Referee waves it off.

26′ A long ball played behind the Ghana defence?but goalkeeper Adam Kwarasey rushes on to clear the danger.

27′ Montenegro begining to impose their play. The Black Stars appear to be taking their foot off the paddle.

29′ Essien shrugs off a challenge and lays off ?a pass to David Addy on the far side. Ball back into midfield with Emmanuel Agyemang-Badu.

30′ Jordan Ayew?fouls Nikola Drincic?just before the referee who rightly awards a free kick.

31′ Jordan Ayew?drives one across the face of goal, but no connection. Corner to Ghana.

32′ Adam Kwarasey?with a big save to deny Montenegro on the break.

33′ So far, so good for Montenegro who are content sitting back only to hit the Black Stars on a swift counter.

36′ Christian Atsu cuts in and delivers a shot but does not trouble the Montenegro goal.

38′ Essien charged down. Referee rightfully awards a free kick in Ghana?s own half. Still 1-0 to Montenegro.

40′ Ghana?s build up has been very slow and predictable with five minutes left to recess.

43′ Players losing their cool as Jordan Ayew?is brought down.

45′ Jordan Ayew?hacked down. Wins a free kick for Ghana 30 yards out. Ball played into the area but does little to trouble the Montenegro defence.

45+1′ Referee blasts his whistle to end the first half. Ghana with a lot to do in the second half to get back into the game.

45′ Ghana resumes play and already a header by Majeed?Waris but it goes wide. Good start by the Black Stars.

46′ Ghana make three changes at the start of the second half. Samuel Inkoom?on for David Addy,?Sulley?Muntari?for Agyemang-Badu and Albert Adomah on for Mubarak Wakaso.

56′ Lovely pass from Sulley but Atsu?s cross was too feeble for a proper connection.

57′- Ghana enjoying the chunk of possession but failing to find the cutting edge. Ghana?s game has improved after those substitutions.

58′ ? Kevin Boateng comes on for Jordan Ayew. Huge applause for the Schalke ace who is very popular here

59′ ? Ghana in their own half with John Boye and Jerry Akaminko looking comfortable at the back.

60′ ? Kevin Boateng struggles to keep possession after the ball bounce of his shin.

61 ? Abdul Majeed Waris soars above Montenegro defense but the direction was poor.

62′ It?s been Ghana all the way. Montenegro sitting back to pounce.

65′ ? Ghana substitution: Kwadwo Asamoah (in) Michael Essien (out). He get round of applause from the home fans here.

67′- Ghana scream for a foul after John Boye was brought down. But the referee will have none of that.

68′ ? Muntari has been very effective since he came on in this half.

69′ Albert Adomah weaves pass his marker but his shot was too feeble and misdirected.

70′ John Boye loses the ball in his own half but Montenegro fails to make the advantage count.

71′ Montenegro steal a chance to counter-attack but the ball has been chipped over the ball. Good chance for the Europeans.

74′- Inkoom is brought down cynically and the referee will whistle for an infringement.

77′- Fine cross from Samuel Inkoom but John Boye was unable to connect at the far post.

80′ Montenegro on the counter but Daniel Opare will weather the threat for the visitors.

81′ Ghana have ten minutes to salvage this game in Podgorica.

82′ Sulley Muntari takes a fabulous free kick but the ball as flying high. Asamoah denied by the last Montenegro man.

83′- Confident display at the back from Kwadwo Asamoah.

85′ Kevin Boateng urges closer but his final shot was too weak to beat the Montenegrin goalkeeper.

86′ Ghana waves for penalty after the ball seems to have hit the hand of the Montenegrin but the referee will overlook that. Replay shows the ball hit the hand.

87′- Montenegro on the counter and Adam Kwarasey is forced to come out to save the situation.

88′ Ghana piling pressure but finding it difficult to find a way around the Montenegro defense. The Europeans inching close to historic win

89′- Ghana has four minutes to salvage their image at the City Stadium.

90′- Good midfield posession from Ghana but lacking creativity up front.

90+2′- Silly retaliation from Akaminko. The Ghana hit the player needlessly. That should be yellow card.

90+3 Muntari is booked for off the ball incident.