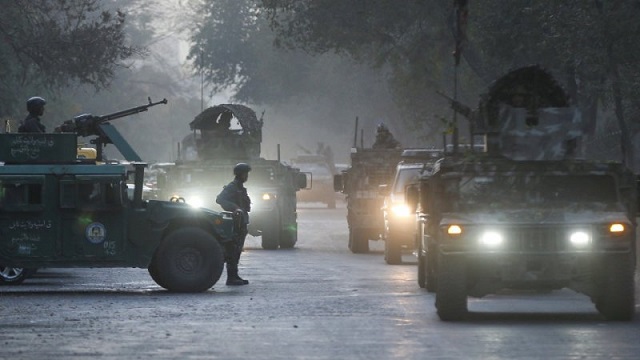 At least 19 people were killed on Monday after gunmen stormed the campus of Kabul University, in an attack later claimed by the Islamic State group.

After entering the campus in military uniform, the assailants took up positions in one of the faculties and exchanged fire with Afghan elite forces for six hours, officials and witnesses said.

Twenty-two other people were wounded, the Interior Ministry said. The three gunmen were shot dead by security
forces, the ministry said.

Islamic State said that there had been only two attackers, according to the group’s mouthpiece, Amaq.
Helicopters hovered over the campus during the assault, with witnesses reporting the sound of sporadic explosions and gunfire.

A US military official confirmed that the NATO-led Resolute Support mission provided support to Afghan security forces during the operation, but declined to provide specifics.

Initially, hundreds of students, professors, and administrative staff of the university escaped desperately over the walls of the compound while later hundreds of others were rescued by security forces, according to officials and witnesses.

During the initial hours, a professor of the university told dpa that an unidentified number of students were taken hostage by the attackers. The professor said there were no safe rooms in the compound nor were any security directions given.

Witnesses said the attack had taken place during a joint book exhibition by Afghanistan and Iran in the compound. Islamic State meanwhile claimed the attack had targeted a graduation ceremony for judges and investigators.

Afghanistan’s president declared Tuesday a national day of mourning to honour the victims of the attack, which was widely condemned internationally.

The European Union mission in Afghanistan called it “an atrocious act” and breach of humanitarian law.
Attacks on high-profile academic institutions in Afghanistan have taken place before.

Late last month, a suicide bomber blew himself up outside an educational centre in Kabul, killing at least 24 and wounding 57 others.

In 2016, at least 16 people were killed in an attack on the American University of Afghanistan (AUAF). A suicide bomber ploughed his explosives-laden vehicle into the university before several others stormed the campus with automatic weapons.