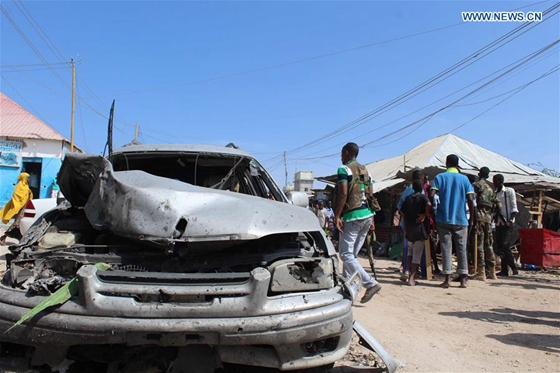 At least 30 people were killed in a huge car bomb blast at a busy market in Somalia’s capital Mogadishu on Sunday, officials said.

Photo taken on Feb. 19, 2017 shows the wreckage of a car at an explosion site in Mogadishu, Somalia. [Photo/Xinhua]

Somali National Intelligence and Security Agency (NISA) confirmed the incident at Kawo-Gudey in Wadajir district, saying the casualties were both soldiers and civilians.

NISA said that Al-Shabaab militant targeted innocent civilians who were going about their daily business activities in the market.

Wadajir district Commissioner Ahmed Abdulle Afrah told reporters earlier that it was difficult to identify dead bodies and those injured at the scene.

“This very extreme hostility was committed by enemy group, more than 20 people mostly women and children were killed and more than 20 others injured at the small busy market. Rescue operation is still underway to rush the injured to the hospital,” Afrah said.

Witnesses said the blast ripped through the market, killing the shoppers mostly women. The death toll is expected to rise, as many people were critically wounded in the attack.

No group has claimed the responsibility of the attack, which could be the first major attack since the election of the new president on Feb. 8.