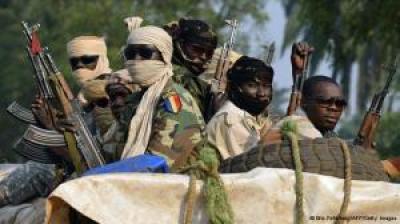 About 25 others were injured, according to the national Red Cross.

Regular machine gun shots could still be heard Thursday morning, after Muslim Seleka fighters started attacking civilians and destroying homes in a Christian neighbourhood on Wednesday, reportedly to avenge the death of one of their leaders.

The unnamed Seleka leader was lynched Tuesday by an angry crowd after he launched a hand grenade into a Christian area, injuring several people. Residents burned his body and abandoned it on the road, according to witnesses.

“The man had pulled a grenade and everyone started screaming. We killed and burnt him,” a resident was quoted as saying.

Interim President Catherine Samba-Panza, a Christian who is said to have the respect of Muslims, has been unable to stop the violence since taking office in January.

Thousands of people have been killed and about a million displaced due to the ethno-religious conflict.