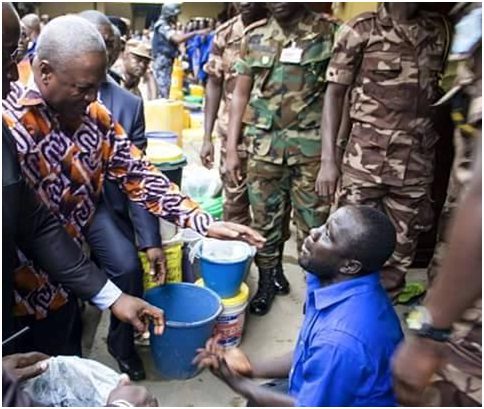 Reports reaching The aL-hAJJ indicate that imprisoned notorious armed robber, Nii Aryee Ayittey alias Ataa Ayi, could soon walk out of prison following his passionate plea to President John Mahama, and confirmation by prison authorities of his good conduct since his incarceration 10 years ago. The once touted ?Ghana most wanted? armed robber, according to sources, is most likely to be included in the list of convicted person to benefit from the next presidential pardon.

Ataa Aryee, who is presently serving a 160 year jail term at the Nsawam Medium Security prison with hard labor, apparently humbled by prison life, bowed before President Mahama to plead for his early release when the President recently visited the facility to acquaint himself with their challenges.

The President together with the Chief Justice, other ministers of state and board and management members of the Ghana Prisons, toured the Nsawam Medium Security Prisons last week to get first hand information on the frequently reported inhumane conditions prevailing at the facility.

Reports are that the once notorious armed robber has turned a new leaf, and has been made a church leader of the Church of Pentecost branch at the Nsawam prisons. There are also reports that due to his newly attained born-again status, he has been made spokesperson of prisoners in Ghana and inmates leader.

?Ataa Aryee is showing signs of reformation. He attends church regularly. At the moment, he has been elevated to a position of an inmate leader,” he stated.

The Minister of Interior, Mark Woyongo, recently said he will recommend him for presidential pardon if he maintains his good behavior in prison.

?If you continue to be of good behavior, maybe we will make some recommendations for the consideration of his Excellency the President,? the Minister told the once hardened criminal.

However, Flag Staff house sources disclosed to The aL-hAJJ that, following Ataa Aryee?s plead for clemency coupled with evidence of him turning a new leaf, the President is likely to grant his pleadings.

Due to congestion at the prisons, the President during the recent visit announced that he will grant remission and more amnesty to prisoners across the country.

?We need to look at the possibility of giving remission of sentence for good behavior?and so I have asked the Director General [of Ghana Prisons Service] to present to my office proposals for remission of sentence based on good behavior, and on medical and humanitarian grounds. Because when I visited the infirmary, I found some prisoners from the infirmary who have suffered stroke and who have such serious health issues that they don?t deserve to continue to remain in prison?, the President said.

A statement from the Interior Ministry said the presidential pardon was granted based on ill health, advanced age and satisfactory behavior of inmates.