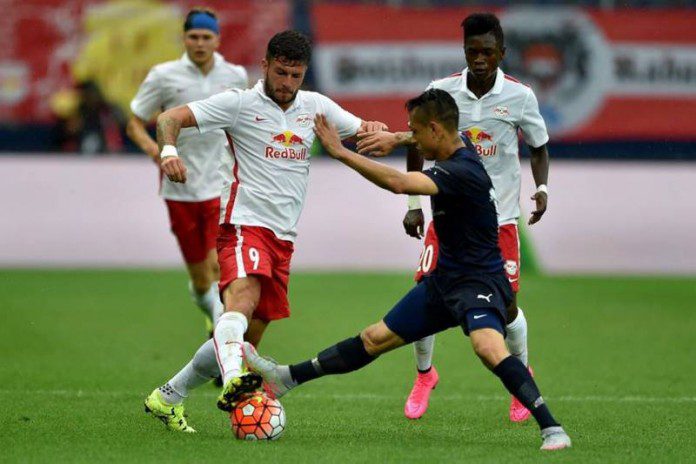 The 18-year-old pint-size Ghana U20 attacking midfielder held down his starting spot in the Red Bull line and lasted till the 92nd minute as Peter Zeidler booked a comfortable win before home fans.

While Atanga was dazzling in midfielder for the Austrian Bundesliga title-holders, midfielder Enock Adu Kofi also started and completed the game in midfield for the Malmo who succumbed to the defeat.

Elsewhere in Finland, former Asante Kotoko defender Gideon Baah was booked in the 55th minute for roughing as his HJK Helsinki side were held to a 0-0 draw by visiting Kazakhstan champions FC Astana. In action for Astana was former Sogakope Red Bull Academy product Patrick Twumasi who lasted 93 minutes of regulation.

There was another stalemate at the Arena Nationala in Bucuresti as Steaua Bucuresti allowed visiting Serbian giants Partizan Belgrade to hold them to a 1-1 draw. Brother of former Inter Milan and AC Milan star Sulley Muntari ? Sulley Muniru, played full throttle for the Romanians who must now get a positive results to ensure their progress to the next round of the competition.

Polish side Lech Poznan will have an uphill task to complete in the second-leg tie when they travel for the reverse fixture to FC Basel in a fortnight time after losing 3-1 on home turf. Ghanaian midfielder Aziz Tetteh was unused by the Polish side who succumbed to a painful defeat before home fans.

In other games, Dutch-born Ghanaian defender Kenny Tete was in full time action for Ajax Amsterdam who held Austrian side Rapien Wien to a 2-2 drawn game. The young full-back, 19, flourished at his role and is set to maintain his spot in the team.