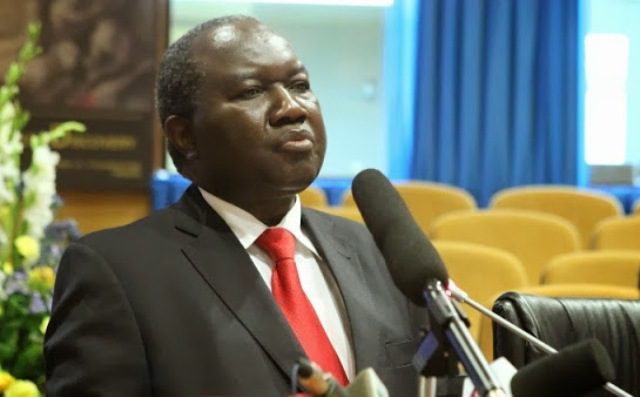 The Executive Director of the Association of Tanzania Employers (ATE), Dr Aggrey Mlimuka

The Executive Director of the Association of Tanzania Employers (ATE), Dr Aggrey Mlimuka, made the call in Dar es Salaam at a CEOs meeting, as part of commemorating World AIDS Day 2015 co-organized by ATE and the International Labour Organisation (ILO).

Dr Mlimuka urged employers to be aware of the menace of HIV and AIDS that it was still a great problem which eroded the productive labour force dependable for increased productivity and business competitiveness.

“We are all aware that HIV and AIDS increase the cost of doing business to most employers and thus joining hands in addressing it would put us and our country in a better place,” Dr Mlimuka observed.

He pointed out that the association was supporting the private sector organisations in establishing and implementing workplace interventions on Health and HIV through provision of capacity building to Human Resource and health officials whereby 66 people had been trained.

“It is vital for employers to adopt workplace programmes as required by the HIV Prevention and Control Act by allocating resources both at the company and national level for smooth implementation of the Aids Trust Fund (ATF).

Implementation of such programmes could not only help in HIV prevention but also curb stigma and discrimination which existed in workplaces.

The Executive Chairman of Tanzania Commission for AIDS (TACAIDS), Dr Fatma Mrisho, pointed out that the HIV Prevention and Control Act prohibits discrimination and stigmatisation of infected individuals at workplaces in any way.

“New World Health Organisation HIV and AIDS guidelines have placed emphasis on testing and treatment because earlier treatment arrives at more survivors,” said Dr Mrisho. The target is to make 90 per cent of people who are HIV and AIDS infected victims know their status and receive treatment.

“The private sector should also contribute to the HIV and AIDS trust fund, noting that care for an individual victim amounted to 300 US dollars per annum,” she noted. Dr Mrisho called upon women to do away with evil ways of living because it’s the most affected group in the world.

A Lecturer with the University of Dar es Salaam, Professor Kitila Mkumbo, urged employers to invest in the health of their employees because it was one way to invest in their business. “Studies have quantified that lack of proper care reduces the productivity and increase absenteeism at workplaces,” affirmed Prof Mkumbo.

US invests US$316 million in Ghana’s energy infrastructure