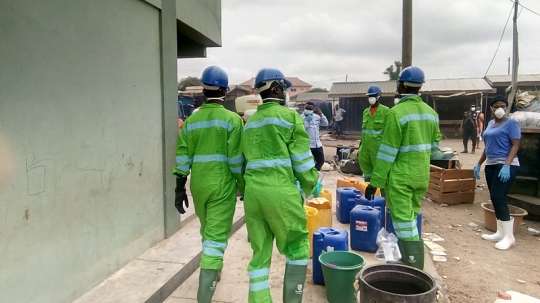 As part of government’s effort to minimize the spread of the COVID- 19 pandemic in the country, the Atiwa East District Assembly has embarked on a fumigation exercise at lorry parks and market centers in the area to prevent the spread of the disease.

Speaking in an interview with the Ghana News Agency at Anyinam in the Atiwa East District of the Eastern Region, Mr Kwabena Panin Nkansah, District Chief Executive said all necessary gadgets required to ensure the success of the exercise has been made available to the district.

He said the assembly was executing the exercise in about ten public centres within the district that include the Abekwase, Subrisu, New Jejeti, Sekyere and Anyinam.

He said the assembly with support from the Ministry of Local Government and the Atiwa East Member of Parliament (MP), Ms Abena Osei Asare, had distributed over 200 hand washing kits and Personal Protective Equipment (PPEs) to health centres, CHPS compounds, lorry parks, market centres and other public institutions in the district.

Mr Nkansah said a satellite market has been created for traders in the area to decongest the main market centre especially during market days.

He outlined some activities carried out by the assembly such as public education and sensitisation of market women on the virus.

Mr Nkansah called on the public to make the frequent washing of hands part of them to avoid contracting the coronavirus.