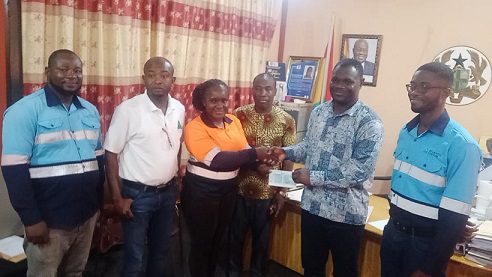 Atlantic Lithium, a registered and recognized organization into mineral exploration and development has donated an amount of GHC 50,000.00 to the Mfantseman Municipality towards the upcoming farmers day celebration.

The donation in the form of a cheque presented was to support preparations towards appreciating and motivating hardworking farmers in the Municipality.

Mr Razak Shaibu Ballah, the interim Country Manager of Atlantic Lithium who presented the cheque said the gestures formed part of the company’s contribution to making agriculture attractive in its catchment areas to serve as a motivation to the youth to venture into farming to reduce the unemployment rate in the country.

Atlantic Lithium he mentioned was committed to supporting the agriculture and food production value chain as well as local initiatives that would help diversify the local economy.

That, he said, would be achieved through the collective efforts of stakeholders and the Government to improve the livelihoods of families.

He noted that the company was committed to working closely with all relevant stakeholders to contribute toward the transformative agenda of the Region.

For his part, Mr Ike Lord Enu, the Municipal Chief Executive receiving the donation expressed gratitude to the company for their continuous support to the council and pledged to use the donation for the intended purpose.

He called on institutions, and individuals to collaborate with the Assembly to support and develop the area for the betterment of all.

The celebration will be held on the theme:’ Accelerating Agricultural Development through Value Addition’.