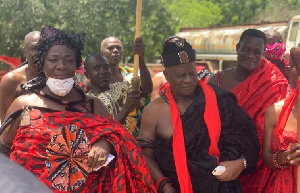 An inordinate attempt by some persons to unlawfully destool the Omanhene of the Gomoa Akyempim Traditional Area, Obirifo Ahunako Ahor Ankobea II has been held questionable since due procedures have not been followed.

Some persons claiming to be Elders and Kingmakers were reported to have instituted a destoolment process against the Omanhene over what they described as “impropriety since his ascension in 2001.”

It is on record that the Omanhene Obirifo Ahunako Ahor Ankobea II was enstooled by the Kingmakers of all the Six (6) Royal Gates of the Royal Asona Family in 2001 after the demise of the late Okukutah Ahunaku Acquah I.

He has held the enviable position till date.

However, some persons have risen up against him attempting to destool him from the position as Omanhene of the Gomoa Akyempim Traditional Area.

It was reported that a Petition for his destoolment was subsequently sent to the Paramount Quenmother, Obaatanpa Ama Eduwa I for the immediate destoolment of the Omanhene.

Meanwhile, information gathered from investigations conducted indicates that, the so-called Elders and Kingmakers are not Heads of the Six Royal Gates except Ebusuapanyin Kojo Odoom.

It has been established that the Gomoa Akyempim Royal Stool is made up of six gates namely including the Garuba Gate, Dokua Gate, Adadzewa, Wordzibeyor, Mbrowa and the Osuan Gate; and each of these gates is represented by the Head of Family (Ebusuapanyin).

Also, the chieftaincy system practiced by the Royal family is the rotational system which permits a gate to appoint and nominate a chief when it gets to their turn.

This paper can state on authority that, by customary practice of the area, an individual from the family whose turn it is to rule, is appointed and presented to all the gates for affirmation and declaration.

This is not a decision by one gate and same procedure is applied to the destoolment of a chief.

Meanwhile, speaking in an interview with Obirifo Ahunako Ahor Ankobea II and his Elders, they revealed that before a Chief can be destooled, all the gates represented by their Ebusuapanyin act together to arrive at the decision to destool a chief or not and such decision is the reported to the Regional House of Chiefs.

According to the explanation, a single Ebusuapanyin cannot act on behalf of all the six gates in such matters.

Meanwhile, in their attempt to push their plan through, some people holding themselves as Heads of the various gates signed a Petition demanding that the destoolment of the Omanhene be executed.

But, checks conducted revealed that except the Ebusuapanyin Kojo Odoom, all other petitioners are not Heads of the various gates clothed with the capacity to call for the destoolment of the Paramount Chief.

Heads and lawful representatives of all the Six (6) Royal Gates in a signed document sent to the Central Regional Police Command indicate that the attempt by the so-called Elders and Kingmakers to destool the Omanhene is an affront to the laid down customary practices of the area and likely to breach the peace of the Traditional Area.

They have strongly disassociated themselves from any such act and are calling on the security services to take the matter up seriously and bring the perpetrators who are trying to destabilize the peace in the area to order.

They indicated that in matters like this, the Asona Ebusuapanyin who is the Head of the Ebusuapanyins in the area must be consulted and notified of any attempt to destool a Chief but nothing of such has been done.

Obirifo Ahunako Ahor Ankobea II said the chieftaincy institution is now regulated by the Act 370, the Chieftaincy Act, 2008 (Act 759) and Chieftaincy (Destoolment Proceedings) Regulation 1963 (LI309) and that the regulatory framework specifically Section 40 of Act 759 stipulates that such destoolment proceedings are to be commenced at the Judicial Committee of the appropriate judicial forums, and that in the instant case, the Central Regional House of Chiefs, since he is a paramount Chief.

He said a Paramount Chief cannot be summon to appear before a divisional chief in any jurisdiction and challenged his detractors to use the right channel in their attempt to destool him bearing in mind section 63 (f) of Chieftaincy Act, 2008 (Act 759) if indeed, they are have the legitimate right to do so.