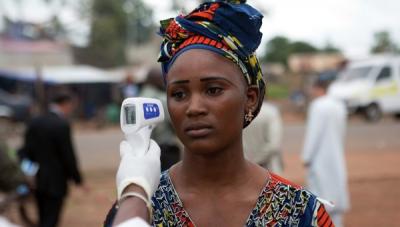 An African Union team of 40 health workers is about to leave for Ebola-hit Guinea, the organisation announced on Wednesday.
It added that the European Union said two of its commissioners would visit the affected countries.
According to AU, the team includes doctors, laboratory experts, data analysts and communication experts from Burundi, the Democratic Republic of Congo, Kenya, Uganda, Nigeria, Niger and Zimbabwe.
It added that they would depart on Thursday.
“We are presenting this team of health workers, but we have also realised that the needs are much bigger,?? the AU Commission Chairwoman, Nkosazana Dlamini-Zuma, said in Addis Ababa.
The UN estimated that 5,000 medical workers were needed to curb the epidemic in West Africa.
The AU has pledged a total of 2,000 health workers, 100 of whom have already travelled to the region.
One of the members of the team leaving for Guinea, Rwandan Doctor Landry Mayigane, said that health workers were worried about isolation and stigmatisation after visiting affected countries.
“We cannot stem the Ebola epidemic without using the health workers.
“We cannot take anyone from the streets to fight the epidemic.
“Those who have decided to go there in spite of the risks should be treated with dignity,?? Dlamini-Zuma said.
Meanwhile in Brussels, European Commission President, Jean-Claude Juncker, announced that several of his commissioners would soon visit the countries affected with Ebola.
Humanitarian Aid Commissioner, Christos Stylianides, who served as the EU’s Ebola Coordinator, and Health Commissioner, Vytenis Andriukaitis, would travel to Sierra Leone, Liberia and Guinea on Nov. 12 to Nov.16.
“I would like the commissioners to get information on site and to act on site,?? Juncker said.
The EU and its member states have contributed over 900 million Euros (1.1 billion dollars) to the fight against Ebola, which has killed nearly 5,000 people in Guinea, Liberia and Sierra Leone.