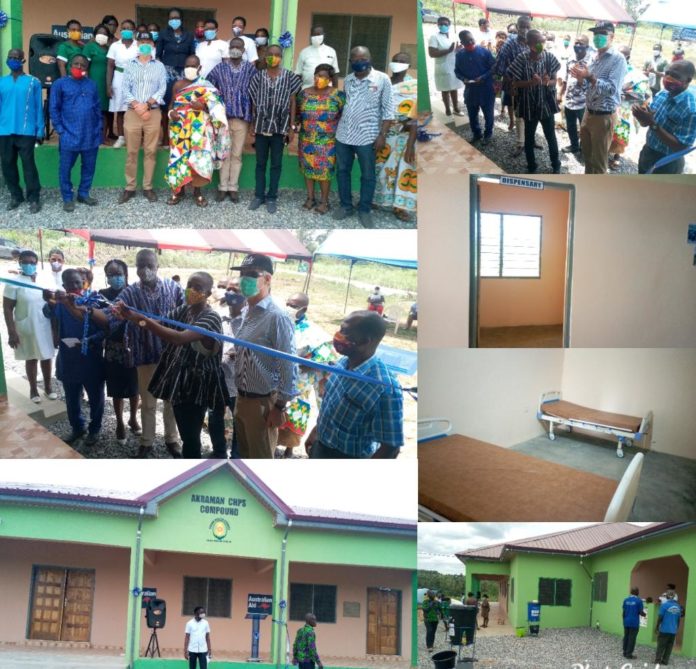 The Australian High Commission on Tuesday, unveiled and handed over a Community-Based Health Planning and Services (CHPS) compound to the Akramang community, a suburb of the Nsawam Adoagyiri Municipality in the Eastern Region.

The ¢207,000.00 worth compound, constructed by the Ark Development Organisation, a nongovernmental organisation, has a maternity unit, cold chain room, consulting room, dispensary, Family Planning Unit and an accommodation facility for the head of the health personnel.

In addition to basic healthcare, the facility would also serve as a COVID-19 Treatment and Isolation Centre for the Municipality.

He expressed the hope that the facility would go a long way to improve the quality of health services delivery not only in the Akramang community but also for people from neighbouring communities.

He expressed optimism that the facility would give the High Commission value for its invested funds.

“Thank you the people of Akramang for your support of this project. This project wouldn’t have come to fruition without your support. I urge you to take ownership of this facility, that way you help build a healthier and a safer community for all of us,” he said.

Mr Frank Annoh-Dompreh, the Member of Parliament for the Nsawam-Adoagyiri, entreated the High Commission to consider encouraging private power producers from Australia to invest in businesses in Ghana especially in the Municipality.

He said Nsawam is an area for mass production of food products and a lot of waste are produced and sent to a landfill site.

He said an investment in the waste produced could help to produce energy for commercial and domestic usage.
Mr Isaac Kwadwo Buabeng, the Municipal Chief Executive of the Nsawam Adoagyiri Municipality, appealed to the High Commission and other corporate entities to support neighbouring communities with similar projects.

He thanked the High Commission, traditional leaders, health workers and members of the community for cooperating to ensure the successful competition of the project.

As at 2018, he said, statistics shows that Ghana had 5,128 CHPS compounds functioning, even though 6,500 were needed under the Ghana Health Service delivery structure.

He said the Akramang Electoral Area was using someone’s house as a health facility and the owner has given them a notice to vacate the premises adding that this would leave the people with no choice than to travel long distance to access healthcare in Nsawam.

Meanwhile the enormous quarries surrounding the communities made it prone to disasters, a situation which could make the more than 2,436 inhabitants of the area struggle to access basic healthcare.

He said the facility would thus help to reduce the pressure on the existing health facilities in the municipality.

Mrs Eunice Abuaku, speaking on behalf of the Municipal Health Directorate, said sexual and reproductive health, early infant diagnostic, expanded programme on immunization, growth monitoring programme, and disease surveillance and control as some of the services expected to be rendered by the CHPS compound.

Others are treatment of minor ailments, health education and counseling for healthy lifestyles and good nutrition, home visits, community mental health, school health services and care for the aged.

She, however, said these services could not be rendered without the support and cooperation of the community and urged them to join efforts with the health workers to enable them to attain their objectives.