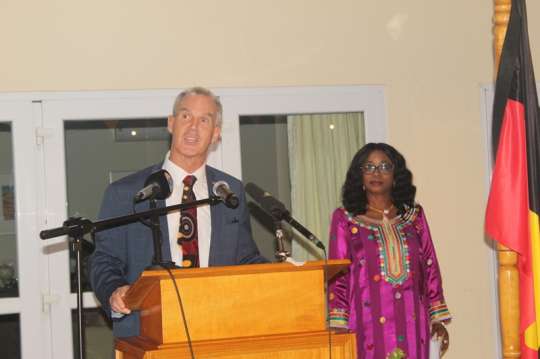 Ghana’s record of holding peaceful elections and smooth transitions of power, was the envy of many nations and that there was the need for all to continue this feat and consolidate democratic governance for sustained growth.
He was speaking at a reception to celebrate Australia National Day in Accra.

He said Australia’s relationship with Ghana was based on shared interests, including democracy, commitment to peace and security and the importance of free trade and investment for mutual benefits.

The High Commissioner commended the government for initiating the “Ghana Beyond Aid,” agenda, adding that, the Australian government recognized education and training as key pillars in achieving the goal.

“For this reason, the Australia Awards Scholarship programme has form an integral part of our cooperation with Ghana by contributing to strengthening the nation’s human capital and fostering an understanding of each other’s cultures, political systems and economies,” he added.

Mr Barnes said the Australian government, since 2011, had supported over 400 Ghanaian professionals with scholarships to study in Australia in various disciplines where over 50 per cent of beneficiaries in Master’s programme were female.

Touching on responsible mining, Mr Barnes said the Australian mining companies had contributed significantly to Ghana’s development through the royalties and taxes.

“Our companies pride themselves on the transfer of knowledge, skills and expertise to the Ghanaian workforce.”
On social interventions for women empowerment, he said, they had instituted projects that promoted gender equality and women’s economic empowerment in areas of education, health and sanitation.

The High Commission in its quest to fight domestic violence, raised an amount of GHC200,000.00 from the Ghanaian and Australian mining companies at the launch of the Commission’s 2018 annual Melbourne Cup Charity Gala.

The money was presented to the Pearl Safe Haven, an NGO and the Police Service’s Domestic Violence Victims Support Unit to help build a safe house for victims of gender violence and abuse in the Greater Accra Region.

Phase one of the building project, he said, was expected to be completed and inaugurated in May, 2020.

He said they were leading the way with other diplomatic missions in Accra in demonstrating that installing solar power systems was not only good for the environment, but also made great economic sense.

Mrs Cynthia Morrison, the Minister of Gender, Children and Social Protection on behalf of government, congratulated Australia on the occasion of its National Day.

She said Ghana shared the pain of Australia’s recent prolonged bush fires that claimed lives, displaced many people, ravaged the landscape and heavily impacted on wildlife.

“Ghana acknowledges the enormous loss of resources during the natural disaster and pledges its continuous support for all international interventions to help Australia overcome this period of difficulty,” she added.

She expressed optimism that the bilateral trade between the two countries, would help to significantly improve the African Continental Free Trade Agreement, creating a huge market for 1.2 billion people and explore business opportunities.

The Australia Day is celebrated on January 26 and commemorates the first landing in Australia by Captain Arthur Philip.