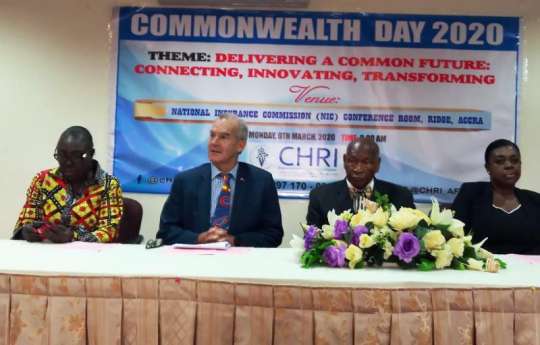 Mr Andrew Barnes, the Australian High Commissioner to Ghana, has urged the Commonwealth to reform itself to remain an organisation fit for the future and relevant to its members and the wider world.

“Only if the member countries are prepared to take the decisions to make it fit for purpose in the 21st Century, with the necessary resources, staff and guidance, will in this historic international organisation continue to exist, and provide useful service to its membership and the world,” Mr Barnes stated at an event organised by the Commonwealth Human Rights Initiative (CHRI) to mark the 71st Commonwealth Day in Accra.

Finding this new, shared vision amongst its very diverse members must be a key objective for the Commonwealth and its members,” he said.

“In approaching the Commonwealth and its future however, we need to be realistic about what it is.”
Commonwealth Day is an annual celebration observed on the second Monday of March by people all over the Commonwealth in Africa, Asia, the Caribbean and Americas, the Pacific and Europe.

The Commonwealth is a political association of 54 member states, mostly former territories of the British Empire.
This year’s event is centred on the theme “Delivering a Common Future”, highlighting how the 54 member countries in the Commonwealth family are ‘innovating, connecting and transforming’ to help achieve some of its biggest goals like protecting natural resources and boosting trade.

Mr Barnes said the Commonwealth itself might have 54 member nations with 2.2 billion people and include 80 plus organisations; adding that however, the Secretariat had a budget of just less than 50 million pounds per annum, including; for its development and democracy work, and a staff of around 250 – less than the numbers who run the UN staff canteen in New York, or the 15 member Caricom Secretariat in the Caribbean.

He said in contrast, the total annual UN budget, including; for peacekeeping, was some 11 billion dollars or eight billion pounds – compared to the Commonwealth’s budget of just 50 million pounds.

The High Commissioner said the Commonwealth’s development budget of around 25 million pounds was considerably less than that of the aid budgets of western Embassies in many developing nations; adding that with such limited resources, it could necessarily only play a modest role internationally.

“Nevertheless, the Commonwealth has considerable scope to play an important role internationally in the areas of building democracy and promoting development,” Mr Barnes said.

“Using its ‘good offices’ it can, and has done in the past, helped member nations, resolved conflicts internally and built democratic resilience, so creating governance conditions for sustainable development.”

He noted that Australia was the third-largest contributor to the budget of ComSec and through its contributions supported the Secretariat’s programmes to promote human rights, democratic norms and good governance among member countries.

He said this year, Australia would provide up to $7.2 million in development funding to the Commonwealth.
“A significant portion of Australia’s budgetary contribution to Commonwealth organisations is dedicated to, the “Commonwealth of Learning”, an intergovernmental organization focusing on strengthening institutions in developing Commonwealth countries that are striving to provide affordable education to larger numbers of their citizens,” he said.

“In Ghana, the Commonwealth of Learning works closely with the Centre for National Distance Learning and Open Schools (CENDLOS), and Higher Education Institutes in developing open and distance learning projects.”

Madam Mina Mensah, Head of CHRI Africa Office, said the event was part of their efforts to showcase what the Commonwealth was about and its worth and it was important that the youth in member countries of the Commonwealth were connected to the organisation.

Mr Sam Okudzeto, a Member of the Council of State, who chaired the function, in an interview with the Ghana News Agency noted that the Commonwealth was still relevant in the sense that it enabled member states to assess their relations with one another.

Access to legal aid is a civil right – CHRI