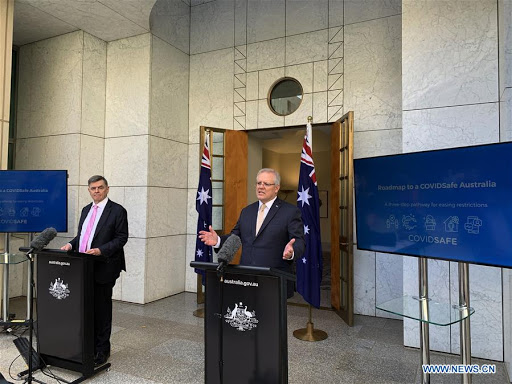 Following a meeting of the national cabinet comprised of the prime minister and state and territory leaders, Morrison on Friday afternoon announced the plan to restart Australia’s economy by July. Morrison said it would be up to state and territory governments to decide when each stage comes into effect.

According to the Treasury, more than 850,000 jobs will be restored by stage three. Morrison said that it would be a gradual process and that Australians should expect more outbreaks as the restrictions are lifted. “In this plan, we walk before we run,” he said.

The national cabinet will review the progress of each stage in every state and territory every three weeks. Morrison was joined by Brendan Murphy, the chief medical officer, who said that 50 percent of the new cases in last week were related to clusters in Victoria and New South Wales (NSW).

“This is what we expect to see and what we’ll continue to see and that’s not such a concern if we’re getting on top and managing these outbreaks as we have in those two cases,” Murphy said. “Six out of eight states have had multiple days of zero cases.

But they all know that that doesn’t mean the virus isn’t still in their community and all of us have to be very careful as we move forward.”

Murphy said that the three-step program relied on the Australians continuing to follow social distancing rules and maintaining high standards of personal hygiene. “We could lose the battle that we have won so well, so far,” he said.
“Every Australian has to do their bit.”