A new rapid-test kit for Ebola could help contain an outbreak of the deadly virus in the Democratic Republic of Congo, according to latest Australian research.

“This test aims to take about 30 minutes and you can do a simple blood test, get results on the spot and doctors will know whether people should be either treated, monitored or quarantined,” Australia’s University of the Sunshine Coast researcher Ameh James, who is developing the test, said in a statement on Wednesday.

“The turnaround time for testing is critical in terms of patient treatment, but what is happening is that patients are sent home for up to three days waiting for their results. In that time, they can easily infect their families and others.”

James, whose work on the new test has been published in the Virology Journal, said the priority now is to secure funding and support for the research, to send kits to affected areas and train people to use them to gain vital data on the efficacy of the test, while potentially preventing people from infecting others.

“We would also be able to collect the data we need to gain regulatory approval to use the tests officially in outbreak situations.”

Ebola is a viral hemorrhagic fever which is spread by direct contact with body fluids, such as blood, of an infected human or other animals. More than 11,300 people are reported to have died from Ebola in six countries, Liberia, Guinea, Sierra Leone, Nigeria, the United States and Mali, during the last outbreak in 2014-2015, according to World Health Organization figures.

Thirty-nine people were estimated to have been affected by the current Ebola outbreak in the Democratic Republic of Congo, according to the university. 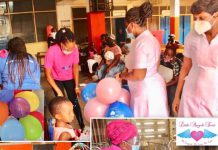