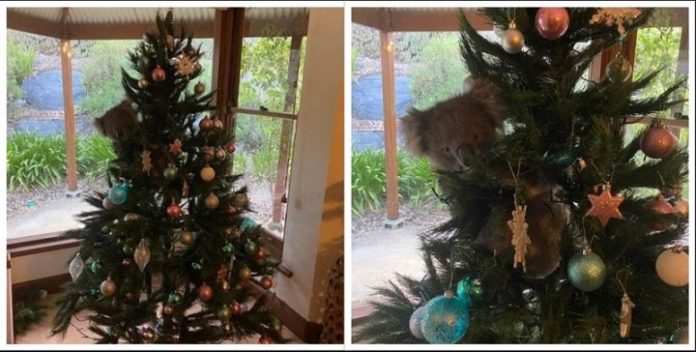 An Australian woman discovered a special kind of decoration in her Christmas tree this year: In addition to the baubles, stars and lights, a koala was hanging onto the trunk, having made itself comfortable in the pine tree.

Amanda McCormick from Coromandel Valley near Adelaide initially thought her children had hung a stuffed animal on the tree.

“At first I thought that can’t be real, but then it moved … gorgeous little thing!” she told 9News.
The reporter quipped, “Only in Australia could a koala become a Christmas decoration.”

The animal is thought to have come in through an open door. “I’m just glad it wasn’t a snake,” McCormick told 9News.

McCormick called the koala rescue service, but there was a problem: The staff thought the caller was joking.
“They did not believe me at all … and made me actually send through a couple of photos and a video to prove that it actually was a koala inside my tree,” she said.

Chris and Annie Wyndham from the organization 1300Koalaz stressed that they had already rescued many of the cute animals from trees, but never from a Christmas tree.

After the two had untangled the female koala from some fairy lights, the rescue went smoothly. The animal was released into the McCormicks’ front garden and immediately climbed a tall tree, this time with no decorations or lights.