A medium-sized bus equipped with autonomous driving technologies made its debut Thursday in Chongqing Municipality, a vehicle-manufacturing powerhouse in southwestern China.

At the same time, Baidu obtained 10 license plates to allow road tests for self-driving vehicles with passengers issued by the municipal government.

After one-year construction, a test base for autonomous driving was put into use on Thursday in Chongqing. Several carmakers have carried out L4 self-driving tests and demonstrations in five application scenarios.

Baidu Apollo will work together with Chongqing to set a benchmark for the self-driving industry in west China, and provide R&D test services and rich application scenarios for carmakers and auto parts manufacturers in the autonomous vehicle field, said Li Zhenyu, vice president of Baidu. 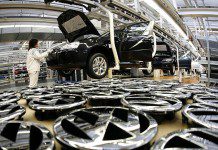