Odeefo Amoakwa Buadu VIII, President of the Central Regional House of Chiefs Fatalities has called for rigorous action by all stakeholders to address the issue of road accidents head-on.

Odeefo Amoakwa Buadu VIII, who made the call, therefore, tasked political parties to avail their billboards for road safety campaigns since the election period was over.

That he said would increase sensitization and education on road safety compliance and adherence to reduce the rate of road accidents in the country.

Odeefo made the appeal at the first General Meeting of the Central Regional House of Chiefs in Cape Coast to deliberate on issues confronting the Region and devise ways of resolving them.

He said the Regional House of Chiefs fir its part, would liaise with institutions such as the National Road Sfety Authority (NRSA), Motor Traffic and Transport Department (MTTD) and other relevant stakeholders in ensuring roads in the Region became safer.

“We will collaborate with all stakeholders to ensure the safety of the general public and to reduce road accidents”, he said .

The President of the House, urged traditional rulers to be more proactive by calling recalcitrant drivers to order because road accidents was taking many precious lives and destroying a lot of property in the Region.

“ We must support an aggressive road safety campaign to reduce road fatalities and save lives and properties “ , he added.

Odeefo Buadu, expressed their unwavering support to developing the Region adding that their motive was to promote peace, ensure safety and increase development.

He called on the general public to adhere to the protocols, take advantage of the vaccine and shun the beliefs and misconception of the vaccine.

Mr Kweku Ofori Asiamah, the Minister for Transport in his address noted that road accidents was a national canker that needed collective effort in fighting it.

He called on the Public to desist from interfering in Police duties in enforcing road safety rules and regulations.

“Lets all allow the police to execute their duties to enforce the rules and regulations to help reduce road accidents” he said.

The Minister of Transport disclosed that the government would soon fix speed cameras on the roads to check over speeding resulting in road accidents and urged drivers to drive carefully on the roads.

He said the rate of accidents was high with over 1,000 road accidents recorded in the Country at the end of April.

Mr Asiamah urged drivers to avoid driving under the influence of alchohol on the roads to reduce motor accidents. 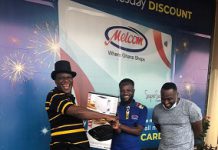