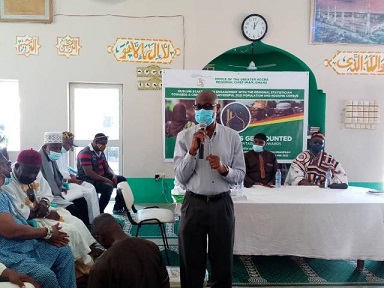 Mr Christian Ayiku Assem, the Greater Accra Regional Statistician has urged the Muslim communities across the country to avail themselves to be enumerated as there will not be any perceived massage of figures.

He said the upcoming Population and Housing Census (PHC) would enable the Ghana Statistical Service (GSS) to compile accurate data of all Muslims in Ghana.

Mr Asem made the call in Accra during a Muslim stakeholder engagement geared towards making the 2021 PHC a successful and credible one.

He assured Ghanaians including the Muslim community that the information they would give to the Enumeration Officers would be kept under strict confidentiality.

The Regional Statistician said all the enumeration officers were under oath to protect every data collected on the citizens and that whoever broke the oath of secrecy of confidentiality would be severely dealt with by the law.
He stressed the need for individuals to make themselves available for counting when the. PHC commences.

Mr Asem added that most of the elite in the country were not willing to be counted as they shy away from the process and a challenge to them, adding that, “if individuals refuse to participate in the exercise the Census Officers would not be able to do anything resulting in a poor Census.”

He said the Census had nothing to do with politics and that Ghanaians must give the Census Officers accurate information to ensure that the GSS have credible data for Ghana’s development.

Mr Abubakar Muhasinu Samori, the Chairman of the. Advisory Board of the Office of the Greater Accra Regional Chief Imam said the event had thrown more light into certain issues that were not clear to some of their brothers in the community.

He said the meeting instilled some confidence in them and gave the people the assurance that the information they would give out would be kept under strict confidentiality.

Mr Samori said the participants would become ambassadors to educate the other Muslim Brothers what they had learned from the Stakeholder engagement.

He said the Board would ensure that people adjust to the reality surrounding the PHC and that they would help clear the fears relating to the Census and educate them of the need for it to the country’s development.

Mr Samori said the Census data being was important in determining the allocation of resources to certain areas for developmental purposes and that the Board would encourage leaders in every Muslim community to educate the people to come out in their numbers to be counted.

Madam Nasiba Tahir-Swalleh, the Census Project Officer of the Greater Accra Regional Chief Imam Office urged all the women in the Muslim communities to avail themselves for enumeration.

She said women were the ones with more information about the households and appealed to them to assist the Census Officers when they come to their homes.

The Muslim Stakeholder engagement was organised by the Greater Accra Regional Chief Imam Office in collaboration with the Greater Accra Regional Statistical Service Office to sensitize the stakeholders on what the PHC was about, its relevance to the Socio-economic development of the country and what citizens were expected to do when the Census Officers came to their houses for counting.