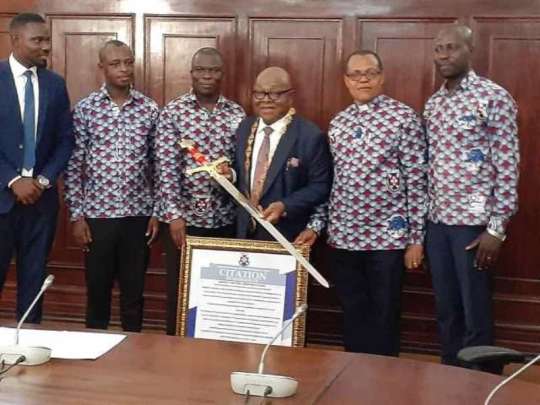 The Speaker of Parliament, Prof Aaron Mike Oquaye has called on school authorities to avoid pampering their students and educate them on their responsibilities in the society.

He said the common refrain that “children are the future leaders” is not wholly true but rather it is for those who are prepared to behave properly and take on communal and societal responsibilities.

Prof Oquaye made the remark when a delegation from the Presbyterian Boys Secondary School (PRESEC) Legon, honoured him with a citation, medal and a sword of Grand Companion for his continuous contribution and support to the school.

The citation and medal were presented to the Speaker on behalf of the school whiles the PRESEC Old Boys Association also presented the Sword of Grand Companion.

The event, which took place in Parliament House, was also in recognition of his intervention to help prevent encroachment on the school lands as well as other contributions to the school.

Prof Oquaye, who is also an old student of the school, urged the school authorities to continue to maintain high standards which the school is noted for and not be moved by other considerations.

He said PRESEC is a school of character training adding that a person cannot go far in life if he does not allow his character to be trained.

He called on the school authorities to ensure discipline in the institution as well as enhance the qualitative results of the school.

Mr Daniel Ogyigya, the Headmaster of PRESEC, who led the delegation, commended Prof Oquaye for his continuous contributions, particularly the donation of GHC 20,000 for ICT activities in the school and the annual donation of books for the Speech Day.

He assured the Speaker that the school authorities would continue to protect the integrity of the institution to maintain its well-earned prestige.

He said the school management would not compromise when it comes to the issue of discipline and the godly factor adding that these were high on their agenda.

Mr Ogyigya said the goal of the school is to ensure that students don’t just go out with good grades but they should be people who can fit well into society.

He said school is currently improving on its academic work and appealed to Prof Oquaye to use his good offices to facilitate the donation of a bus and pickup to the school since the institution does not have a befitting school vehicle.

Ministry of Communication and Digitization supports 100 girls in ICT with laptops.