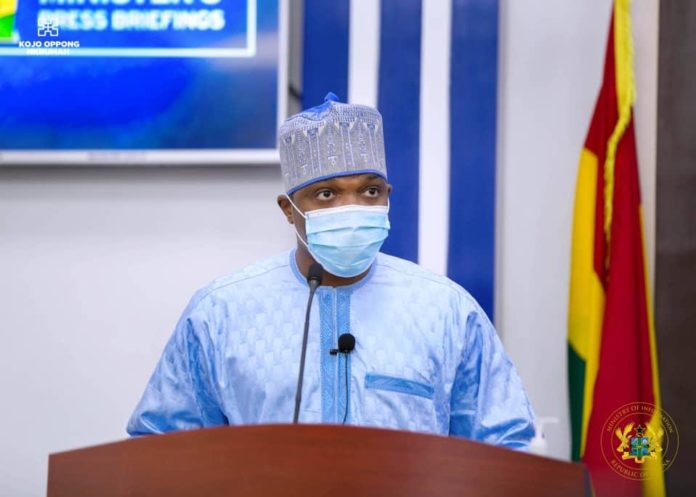 Sheikh Anas Tawfiq Ibrahim-Bakri, the Imam of the Darul Hadith Institute of Islamic Studies, Kumasi, has advised Muslims to stay away from practices that could expose them to the COVID-19.

He said Allah in Quran chapter 2 verse 195 warned Muslims of the repercussions of causing harm to themselves.

Sheikh Ibrahim-Bakir gave the advice at the press briefing by the Minister of Information, Mr Kojo Oppong Nkrumah in Accra on Tuesday with regards to the non-compliance of the COVID-19 safety protocols in Muslim communities.

He said COVID-19 was real and the earlier people especially Muslims accepted the reality and practice the safety protocols the better for all.

According to Sheikh Ibrahim-Bakir, the Holy Prophet Mohammed in his teachings (the Hadith) taught Muslims how to practice social distancing and self-isolation, adding that, the Prophet practiced self-isolation as he stated in “Hadith Bukhari that a sick person should not be placed together with a healthy person.”

He said the Prophet encouraged Muslims to seek medical assistance alongside the power of prayers anytime they were sick for every disease had a cure, he stated and that; “If a cure is applied to a disease then it is relieved by the will of Allah.”

Sheikh Ibrahim-Bakir said it was evident that the Zongo communities should be the least to be affected with COVID-19 if they had observed the precautionary measures outlined by the Prophet 1,440 years ago.

He said there were numerous lessons to be learnt when Prophet Mohammed heard the news of a pandemic during his travel from Madina to the city of Anwas, to better handle the current COVID-19 pandemic.

He said: “The plaque in Anwas was no respecter of persons, religious affiliation or sect and led to the death of 30,000 of the 36,000 armies of the Muslims, it also claimed some 66 out of 70 and all 40 children of some families. Some staunch families and companions of the Prophet lost their lives as well.” he said

“The Prophet consulting with elders as to whether to enter Anwas or return, one of his followers narrated in the Hadith that if you hear of an outbreak in a land, do not enter it. Should plague breakout where you reside, do not leave that place.

Sheikh said based on this Hadith, the Prophet, and his companions returned to Madina without entering Anwas and this was in line with the current travel bans today in the country.

“No Muslim considered their piety and protection from Allah to defy the directives otherwise. The followers whose lives were lost were very loved by the Prophet and very God-fearing. Yet, even they were not spared by the plague,”

He said this should enlighten the public regarding pandemic in the life of Islam to distill the wrong perceptions Muslim brothers and sisters have on COVID-19 as it contradicts the teachings of Islam.

Sheikh Ibrahim-Bakir said there was no shame in testing positive to COVID-19, thus, urged the people to stop stigmatizing against persons who have or have recovered from the disease.