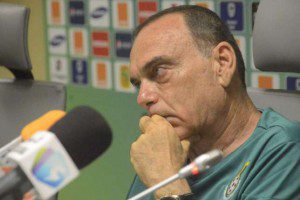 Ghana coach Avrama Grant is worried about the delay start of the local top-flight.

The Ghana FA has finally fixed February 20 as the date for the commencement of the new season after a four-month delay.

The postponement has been attributed to several legal wranglings involving four clubs.

Newly-promoted Techiman City and Wa African United are locked up in a bribery tussle while Tema Youth are challenging the promotion of Dreams FC at the Court of Arbitration for Sports (CAS).

Grant, who has been accused of showing lack of interest in the domestic league, is reported to be unhappy over the latest stand-off.

Author for whichsideofthefoot.com, Abdul Chibsah, highlights the frustrations of the former Chelsea coach after a lengthy conversation with him.

“His frustration falls on the lack of maintenance of our facilities and pitches. Even more, the poor organization and structure that has led to us not even having a start date to our domestic league, as of January 18, 2016,”

“This is no surprise to any Ghanaian football fan. But above all, Avram Grant applauds the Football Association and their efforts in solving those problems.”