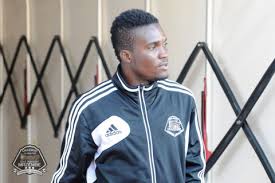 With the late injuries to Emmanuel Agyemang Badu and Godfred Donsah many expected coach Avram Grant to hand a late call up to Thomas Teye Partey of Athletico Madrid and Alfred Duncan of Sassuolo but the Israeli tactician has swerved the duo for TP Mazembe duo of Daniel Nii Adjei and Yaw Frimpong.

The duo were invited as replacements for injured Godfred Donsah and Emmanuel Agyeman Badu who could not join the rest of the squad who are currently in Congo.

Alfred Duncan who has hit top form and lasted the entire duration of the game for his Sassuolo in the Italian Serie A as they went away to defeated Bologna by a lone goal was expected to be handed a call up but head coach Avram Grant thinks otherwise.

Thomas Teye Partey who was a delight to watch during Athletico Madrid?s pre-season was widely seen as a better replacement for the injured duo but the Israeli trainer astonishingly swerved the two for the duo from the 2010 World Club Cup runners up.

Five U-23 players have also been invited to join the team for this afternoon?s friendly as a result of the absence of some players from the original 24-man squad.

The duo have helped the Congolese champions to retain their local league title as well as taking them to the group stages of the ongoing Caf Champions league.

Both Nii Adjei and Yaw Frimpong were part of the TP Mazembe side that lost over the weekend to Al Hilal is Sudan by a lone goal in the African Champions League and are currently 2dn in Group A with 8 points.