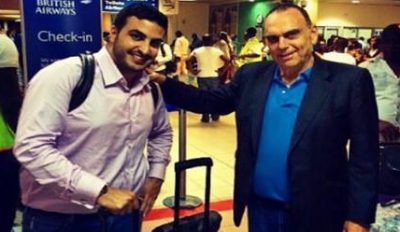 Avram Grant?s agent has jumped to the defence of his client insisting that the Ghana coach has not been travelling abroad for holidays, saying his work as the coach of the Black Stars demands monitoring of his players abroad.

Saif Rubie says the former Chelsea manager?s modern trends of coaching the Black Stars has turned the fortunes of the national team positively in a very short time and must be allowed to continue in his ways.

Grant has come under attack from the local media following his two-month absence with many questioning his loyalty to the country and desire to stay in the West African nation to do his job.

Some analysts have even suggested that he has not lived in the country for two weeks since taking over the job which has led to widespread condemnation of his approach towards the job.

The Israeli manager has spent most of his time in Europe and America claiming to monitor Ghanaian players who are playing with top-flight sides.

However local media say during his interview to take up the job of the Black Stars, the former Chelsea boss agreed to spend more time in the country to monitor local talents.

This has led to pressure on the Ghana FA to crack the whip and several executives  have called for him to be queried over his long absence from the country.

But his agent has slammed the report that the manager has been on holidays insisting his trips abroad is meant to further boost the Ghana national team.

?Avram is happy to have the privilege of being a national team coach,? Saif Rubie told the BBC Sports Today program.

?In a short period of time he managed to turn around the whole nation?s attitude and expectation of the national team after the debacle of the World Cup.

?All he does is watch games and prepare for the next and that is his priority. The outcome of it shows in the games so far.

?He has not been on holidays?, Saif continues  ?He has been scouting players all over Europe.

?He has been organising coaching clinics for the coaches in Ghana because he believes good coaches will bring good players.

Grant returned to Ghana on Sunday after being away since the Black Stars played Mauritius in a 2017 Africa Cup of Nations qualifier which they won 7-1 in Accra.

However, pundits say he should have been staying in Ghana to monitor local players with the league getting to its climax.

Persons Opposed To My Investment In Salt Sector Not Patriotic – McDan