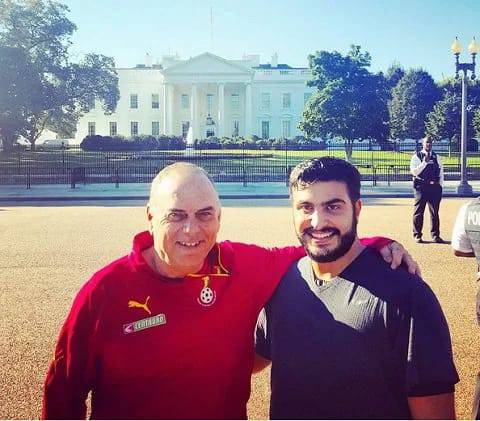 Avram Grant’s agent Saif Rubie has used his Twitter account to reply Ghanaians over the recent outpour of enquiries concerning the whereabouts of his client.

Avram Grant is currently in Europe where he spends most of his time working.

GFA boss, Kwesi Nyantakyi recently called on the Black Stars coach to show up as preparation for Ghana’s date with Mozambique in the AFCON qualifier in Accra on March 24, inches closer.

Saif Rubie’s reply comes in at a time when many Ghanaians have added their voice to the call of the FA capo.

Avram was publicly seen at the Giuseppe Meazza stadium in a pose with with Kwadwo Asamoah when Juventus beat Inter Milan 3-0.

The black stars midfielder played for 84 minutes until he was replaced.

He launched a veiled attack on those complaining over the Black Stars coach’s long absence from Ghana insisting the manager is working in the interest of the country.

Rubie, says many people do not know that the coach is working even in his sojourn abroad and thinks there is too much talk over the issue.

He hit back by tweeting: “People talking, Avram working,” accompanied with a picture of Grant and Kwadwo Asamoah during his visit to the player.