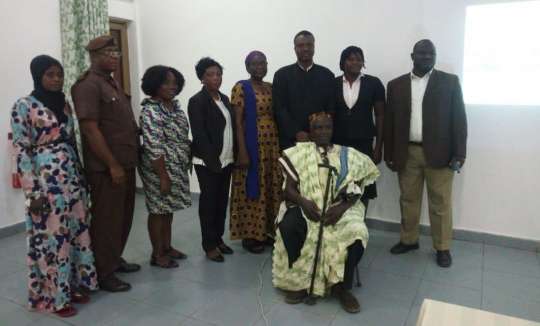 The workshop held in Tamale, formed part of AWLA’s implemented project known as “Strengthening Civic Participation and Social Accountability in Justice Delivery”, project implemented in the Walewale Municipality in the North East Region and the Tamale Metropolis in the Northern Region and funded by STAR Ghana.

The project, implemented between 2018 and 2020 seeks to improve on justice delivery system by empowering citizens to develop positive attitudes and relevant skills for effective participation in justice delivery processes in the country.

CUC is a committee formed by AWLA to help facilitate timely and effective justice delivery for court users, especially the vulnerable by improving on public participation in judicial processes through information sharing among members of criminal justice institutions.

The workshop was to further help review the Court Users Committees (CUCs) efforts in identifying, addressing and educating citizens on issues affecting justice delivery as well as finding lasting solutions to challenges that affect access to justice within the Walewale, Tamale and their surroundings since the inception of the project.

The others are the Tarkwa and Takoradi Market Courts in the Western Region and the Tamale High Court and Walewale District Court in the Northern and North East Regions.

Madam Edna Kuma, Executive Director of AWLA, speaking at the workshop, said the CUC formed through the project was to assist people, especially court users ( those who have their cases pending in court), to help facilitate the court processes and obtain justice, especially for women and children.

She said most citizens lacked knowledge on the processes to follow to demand justice when their rights have been infringed on and sometimes feel intimidated when in court.

Madam Kuma said through the CUC, AWLA established monitoring desks in the courts, where the project was operating, to monitor court cases, collate information on responses from court users and make known, the findings from the court to members of criminal justice institutions and other stakeholders.

She said AWLA had plans to extend the project after 2020 and indicated that the Association lacked funds to continue with the project and therefore appealed for more support from donors.

Some key issues raised from participants as affecting justice delivery at the event in the two areas, included long distances from court, limited number of courts, frequent adjournment of cases and additional payment to bailiffs for serving the writ of sermons, even though payment for bailiffs are part of the filling fees, among others.

Mr Inusah Iddrisu, Chairman of the CUC in Tamale noted that the AWLA-STAR Ghana project effectively collaborated among institutions represented in the CUC, facilitated justice for many citizens, particularly women.

He said the education and enlightenment of citizens, especially court users, on their fundamental human rights and how to demand justice following several media engagements on radio had yielded some positive results.

“After holding about three radio programmes in Tamale and giving my number out to listeners, several citizens who did not know how or where to get justice for various issues, now contact me to seek legal advice on their court cases. I attend to them and sometimes refer them to seek advise from other legal institutions” he said.

He suggested the need for CUC to continue to host more discussions on the justice delivery process and said CUC was faced with the challenge of funds to host such educative programmes.

He therefore appealed to the donor world and charity organisations to support Association expand and extend the project.