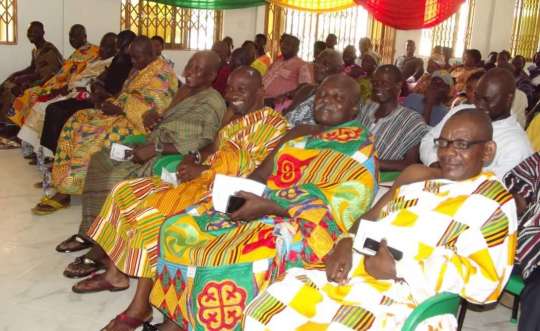 Mr. Kwamena Duncan, Central Regional Minister has called on Ghanaians to support the government in its effort at building a prosperous nation for all.

The situation, where people of the other political divide did not appreciate anything good about the ruling government is not the best in the country’s democratic dispensation.

Mr Duncan made the call at an Accountability Forum organised by the Awutu-Senya District Assembly on the theme “The Akufo-Addo Government impact: Awutu Senya District in Focus” held at Awutu Bereku.

The event was attended by a number of traditional rulers, Heads of departments, Teachers, Service commanders, members of Civil Society Organisations, Former assembly members, Opinion leaders and the Media and some Municipal and District Chief Executives in the Central Region.

The Minister said successes were not achieved in a vacuum, but through planning and hard work hence government’s efforts to undertake a number of programmes, projects and innovations aimed at bettering the lots of the citizenry, despite the challenges inherited.

He appealed to people of Awutu-Senya Constituency to continue to rally behind the Assembly, the Member of Parliament for the area and the government to execute more projects and programmes to improve their living conditions.

“As parents, let us invest more than we can in the education of our children to acquire knowledge and skills to become useful citizens in the future rather than investing in things which will not bring any benefit to them”, he added.
Mr. Stephen Kwame Quaye, Awutu-Senya District Chief Executive said, Awutu Senya District has a population of 86, 884 made up of 40,903 males and 45,981 females representing 3.9 percent of the total pollution of the central region as per the 2010 population and housing census.

He indicated that within the past two and half years, the District Assembly has undertook over 300 projects and programmes to promote education, health and to improve the living standards of its people.

Others were, Information, communication, Technology (ICT) training for Girls, renovation of maternity and female Wards at Bawjiase Poly Clinic and Senya Health Centre, providing teaching and learning materials to schools, fencing of Obrachire SHS, rehabilitation of roads, Donation of Hair Dryers and Sewing machines to Dressmakers and Hairdressers and donation of computers to schools.

The projects and interventions executed during the period were funded by the assembly and the Nenyi George Andah Member of Parliament for the area, he stated.

Mr. Quaye said the district, a hub of agriculture and its related activities had about 54 percent of the people working in that sector with the Assembly distributing 24,530 coconuts seedling to 490 persons working on 377 acres of land under the Planting for Export and Rural Development.

Under the Planting for Food and Jobs, he indicated that from 2017 to 2019, 4,057 persons benefited from the programme.

As part of the one District one Factory, a Cylinder Factory is under construction at Oshipo , a community in Awutu Bereku, while a block and organic tomato and fertilizer factories were progressing in the district.

He assured the people of the Assembly’s continuous commitment to work harder to bring total smiles to the faces of all and sundry and appealed for them to also honour their tax obligations to enable the Assembly to have enough fund to supplement the common fund and other grants for development.