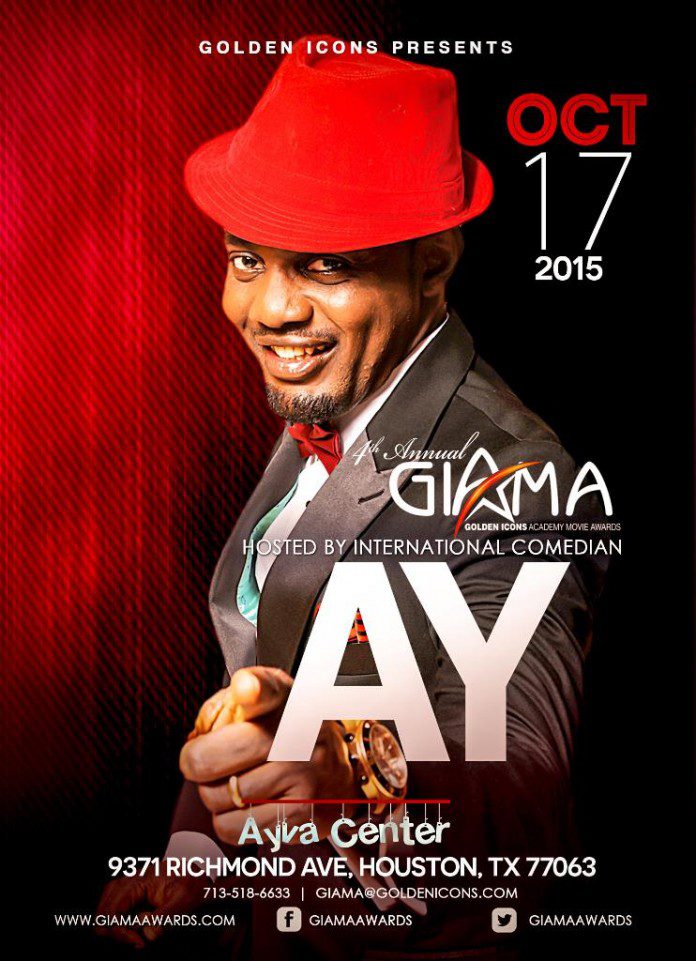 The Golden Icons Academy Movie Awards (GIAMA) has definitely come a long way! The maiden edition of the awards commenced with the very first inaugural host in 2012, Jim Iyke, which was followed by Nollywood?s highly sought-after actor ?Ramsey Nouah?, then the comedic genius, Julius Agwu., and finally for this year, GIAMA is proud to announce that we have the one and only comedian / phenomenal actor, and one of the most prestigious celebrity brands in Africa, AY Makun as the host of the 4th Annual GIAMA Awards. With AY onboard as GIAMA’s host this year, the super-talented comedic actor brings to the show an unparalleled touch of excellence that has been widely attributed with his tremendous and successful career. We cannot but reiterate that he was the pioneer, producer, and star actor in the best-selling movie of all times in west African Cinema ’30 days in Atlanta?, and the exceptional brilliance and ingenuity associated with AY’s highly revered brand makes him the perfect fit for this year’s host.

Additionally, with the culmination of several years of experience as an ace stand-up comedian/ host coupled with his top-notch comedic acting skills, AY is sure to bring alive the GIAMA stage on October 17 with an outstanding performance to the excitement of the audience.

AY Makun is a multiple award winning actor and also the host of one of Africa’s most popular comedy shows, AY Live that draws thousands of crowds every year, and widely regarded as the best comedy show in Nigeria.

The 4th annual GIAMA is set to captivate a lively audience on October 17, 2014 in Houston Texas.

The GIAMA organization is poised to bring you the most anticipated event of the year in the United States, featuring some exclusive performances by the industry’s highly-acclaimed entertainers and comedians. The headlining entertainers will be announced soon!!