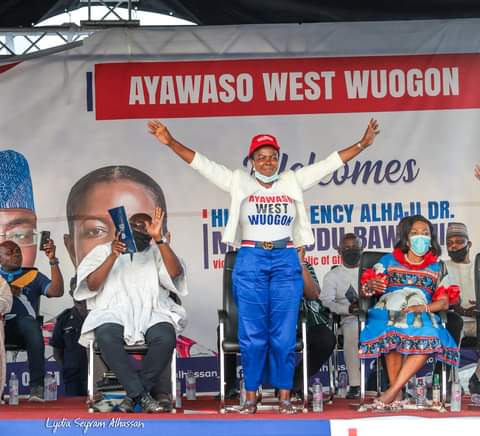 The Member of Parliament (MP) and 2020 Parliamentary candidate for the NPP for Ayawaso West Constituency, Hon. Lydia Seyram Alhassan has conveyed her constituents’ promise of voting massively for the party in the coming elections to the President, Nana Addo Dankwa Akufo-Addo.

According to her, the Ayawaso West Wuogon constituency is ready for her and the President so they can continue with the good works they have started in the constituency.

Addressing a Durbur of Chiefs and people of Abelemkpe in the Ayawaso West Constituency, the MP indicated that it was not for nothing that the people of Ghana voted massively for the NPP and that, Ghanaians saw the competency in Akufo-Addo and with the belief that he can deliver.

She said, the people of Ayawaso West are ready to vote “Boom Boom Boom Boom” for Nana Akufo-Addo and herself in the December elections, so they can continue with the good works in transforming the Constituency and the entire nation.

Hon. Lydia Seyram Alhassan who spoke amid cheers from the supporters averred that the Akufo-Addo government has achieved a lot for the people of Ghana in its first four years.

She noted that the NPP government has been able to execute programs and policies which their opponents considered unachievable.

She however appealed to the people to massively continue to support the NPP government and push it for another victory so it can continue with the developmental projects they are bringing to the constituency and to the whole country.

Hon. Seyram Alhassan, said the ruling government had asphalted the deplorable roads in the Constituency, started constructing an Astro Turf and a health facility in the area.

According to her, the NPP has competent leaders who are steering the affairs of the nation.

She described Dr Bawumia as an intelligent and hardworking Vice President who has distinguished himself as a powerhouse of knowledge in the field of economics and management of the economy as the head of the Government’s Economic Management Team.

“The Vice President is very intelligent and hardworking that is why am pleading with you to vote for me and President Akufo-Addo to continue our good works. Never in the history of Ghana has a Vice President been so visible and notable in government business,” she added.

The Vice President Dr Mahamudu Bawumia who graced the occasion averred in his message that the Akufo-Addo-led government has laid a solid foundation during its first term in office for prosperous socio-economic development in its second term.

He called on Ghanaians not to make the mistake of voting for incompetent ‘mason’ John Mahama, NDC’s flagbearer, to ruin the fortunes of the country’s anticipated progress.

Dr Bawumia said the Mahama-led government was a total failure and could not be trusted to continue the good policies started by the ruling NPP government under President Akufo-Addo.

He further explained that the ruling government had also restored the teacher/nursing trainee allowance cancelled by the previous administration, paid two billion Ghana Cedis arrears of the NHIS left over by the NDC government and fulfilled 80 per cent of its 2016 electioneering campaign promises.