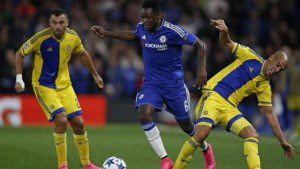 Ghana defender Baba made his debut for Chelsea on Wednesday

Ghanaian defender Baba Rahman has revealed that his compatriots Michael Essien and Christian Atsu who both played for English side Chelsea have been giving him the tips on how he can succeed with the Blues.

The 21-year-old made his debut for the English side on Wednesday, helping the English champions keep a clean sheet in a 4-0 win over Maccabi Tel Aviv.

Rahman joined Chelsea from from German side Ausburg last month and impressed in the Chelsea first team after making his debut in the Champions League on Wednesday.

Rahman revealed that compatriots Essien and Atsu who played for Chelsea have encouraged him to make an impact at the club.

?They gave me some top lines of advice and told me that I if push hard I can make it through,? he said.

The Ghana defender is expected to be a regular player for Chelsea following his impressive debut.